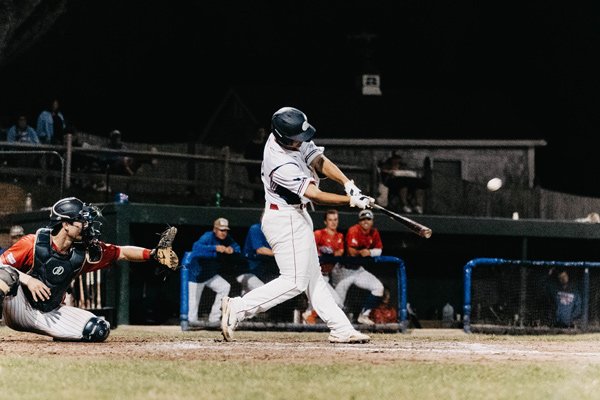 The Y-D Red Sox came into the week with a chance to extend their division lead with three games against Brewster. Although they played to a tie in the first matchup of the week, they topped the Whitecaps twice at Stony Brook Field later in the week to take an eight-point lead in the division.

A win over Bourne and a split against Chatham put Y-D at 4-1-1 on the week.

In weeks past, we have put starters who have had dominant starts in this section. This week, the entire Y-D staff was excellent. Starters Bryce Robison, Eric Yost, Drew Dowd, Grant Taylor, Jared Lyons and Connor Markl combined to go 29 innings and gave up just two earned runs (a 0.62 ERA), capped off by Markl going five no-hit innings in Brewster on Sunday.

The only starter who didn’t go at least five innings was Dowd, who was forced to leave after three innings because of a lengthy lightning delay in Brewster.

It’s near impossible to predict how the rest of the season and the playoffs will go, but if the staff continues to impress, Y-D will have a shot in any game they play.

Shliger went 7-20 (.350) at the plate this week, driving in three runs and scoring four of his own. He’s continued to be an OBP machine, reaching base safely in all six games this week and holding the Cape league lead with a season OBP of .437.

Shliger was named the starting catcher for the East division in the Cape Cod All-Star game.

In six games this week, Bush Jr. went 8-17 (.471) at the plate and posted a .550 OBP. He scored six times and had one hit in all five games he had plate appearances in (he was a pinch-runner in the tie against Brewster at the start of the week).

Bush Jr. was named as a reserve for the Cape Cod All-Star team.

Today is day three of the MLB Draft, but check here for a recap of the first two rounds and click here for a rundown of everyone with Y-D ties who went on day two.

Stay tuned to our Twitter for updates throughout day three.

The All-Star game is this Saturday at Spillane Field in Wareham.

Tickets can be purchased here and more on Y-D’s All-Stars can be found here.

After an off day yesterday, the Sox are back in action tonight, where they host the Harwich Mariners.

On Wednesday, Y-D will make a trip West to play the Hyannis Harbor Hawks at Dunkin Donuts Park in Hartford, Connecticut. Dunkin’ Donuts Park is home to the Hartford Yard Goats, the Triple-A affiliate of the Colorado Rockies.

The short week will wrap up with two more home games against Cotuit and Wareham.

Standout Players around the Cape

Right now, the closest battles are out West, where Cotuit and Hyannis continue to battle it out for the division lead and just one point separates Falmouth and Wareham for the fourth and final playoff spot in the division.

In the East, Y-D is up to an eight-point lead, and Orleans is quietly sneaking up on Brewster for that second spot. Chatham is within striking distance of the final spot after winning two straight and Harwich losing three in a row, so that may be something to keep an eye on down the stretch.