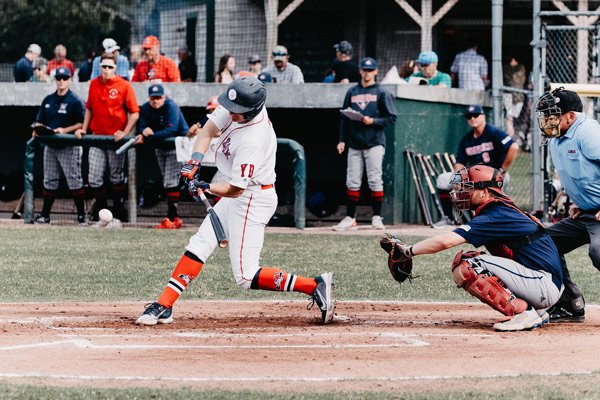 After the top of the fourth inning on Tuesday at Red Wilson Field, the mood in the park matched the gloomy overcast. The Y-D Red Sox hadn’t had a runner reach base yet, and Bryce Robison was knocked around, allowing seven hits and five runs to give Harwich a 5-0 lead.

The mood was much brighter after the game was, however, where the Sox had not just overcome the 5-0 deficit, but a 7-5 ninth-inning deficit to earn a 7-7 tie.

“We weren’t phased at all,” Caden Connor said after the game with a smile. “We were down 5-0 and I was telling the fans in the outfield, like, oh we’re fine. (They said) Caden, can you come back in the 9th? I said come on, you know that.”

Cole Carrigg got the Sox’s first hit in the bottom of the fourth, and Robison rebounded to pitch a perfect fifth, but Y-D still faced a five-run deficit.

Braden Montgomery made the first big Y-D splash of the game, sending a ball 97 miles per hour off the bat, towering 403-foot home run well past the center field fence to put the Sox on the board.

Out of the pen, Aaron Calhoun came in and help the Harwich bats at bay, starting with a perfect sixth inning.

Calhoun held his own in the top of the seventh, allowing a single but retiring the other three batters he faced. Carrigg drove in the tying run with a two-out single in the bottom half.

It appeared that the Sox were going to be able to salvage at least a point, but Harwich didn’t go quietly. In the top of the ninth, they loaded the bases with a hit batter, a walk and an infield single. A flyball to center from Tommy Seidl was enough to score Mac Guisette from third for Harwich to retake the lead.

Shaun Gamelin then walked two more to add on an insurance run. With the bases loaded, Hunter Stokely lined a hard-hit ball that seemed destined for the grass in shallow center, likely plating two more to put the game out of reach.

Instead, Carrigg used every inch of his 6’3” frame to leap into the air and rob Stokely of a hit.

Even with Carrigg’s nice grab, it appeared the Sox comeback was going to come up just short. Jonny Long was able to draw a walk and Zach Lew was hit by a pitch, however, to quickly put the tying runs on base with no one out.

Mike Boeve, who has been dealing with a thumb injury, came in to pinch-hit and laid down a perfect sac bunt to move both runners to scoring position.

Homer Bush Jr. then tied the game with a single. Lew initially was held at third but raced home after the throw from Jonathan Santucci bounced over Guisette’s head and into the Y-D dugout. Bush Jr., who had advanced to second while the throw was in route, was awarded third base when the ball went into the dugout.

With the winning run now just 90 feet away and just one out, the Sox comeback was just one knock away from being fully complete.

Instead, Carrigg struck out swinging and Luke Shliger hit a routine fly ball to center for Y-D’s 7th tie of the season.

While they weren’t able to put the final touch on the comeback, they were confident in the fact that their confidence never wavered, as represented by Connor first, then by Montgomery.

“A lot of resilience,” Montgomery said when describing what he learned saw from him and his teammates. “We weren’t playing uptight when we were behind. Playing your game, letting it take its course, and we see good things happen when we relax and play ball.”

The Sox now sit at 17-9-7, nine points clear of the Brewster Whitecaps in the East division as of writing.

The Sox leave the state tomorrow when they travel to Hartford, Connecticut, where they will play the Hyannis Harbor Hawks at 11 a.m. at Dunkin’ Donuts Park.