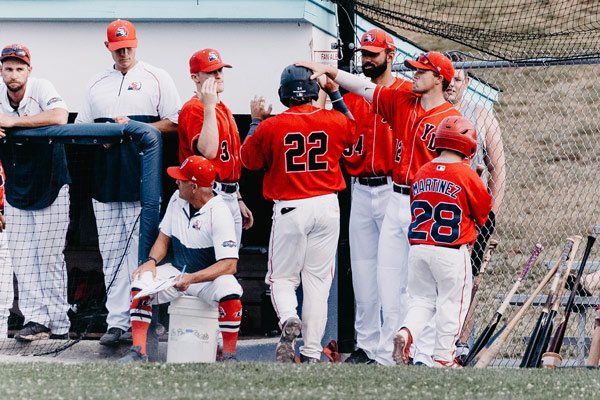 A three-run third inning was all the Red Sox needed in a 3-0 seven-inning win over the Brewster Whitecaps on Thursday at Stony Brook Field. Drew Dowd, Aaron Calhoun and Dylan Ray combined to allow just three hits and shut out the Whitecaps to extend Y-D’s division lead to three games.

Neither team plated a run in the first two innings, but the Sox got to Brewster starter Ryan Ure in the third.

After two singles and a walk, the bases were loaded for Cole Carrigg, who hit a sacrifice fly to score the first run of the game. Chase Meidroth, in his final game with Y-D, and Braden Montgomery followed with an RBI single each, tacking on two more to make it 3-0.

At the same time that the Sox were scoring the game’s first runs, rumblings began in the crowd about a possible impending delay, as dark storm clouds approached.

In the bottom of the fourth, the game entered a 46-minute weather delay as a thunderstorm rolled through Brewster.

Dowd, who had worked three scoreless innings and had two strikes on the first hitter he faced in the fourth, didn’t return to the mound after the game.

In what was just his second start of the summer, he was still on a pitch count and knew once the delay extended into the half-hour range and beyond, he would not return to the mound.

“I think today I felt a lot more like myself, just going out there and pounding the zone,” Dowd said. “Obviously I wish I could have gone longer, but it was a good outing and I’m looking to get out there again next week.”

Despite the early exit, Dowd said he felt more comfortable with his routine leading into the start and also with Y-D Field Manager Scott Pickler’s pitch calling.

After the delay, Calhoun threw a scoreless fourth, and Ray didn’t allow a hit and struck out three in three scoreless innings.

“Every guy in that bullpen, I trust when I hand them off the ball. Everyone is doing their job right now, their part,” Dowd said. “Three runs right now feels like a lot more than it is just because of how well our guys are doing in the pen. We have confidence in everybody back there.”

With the win, the Sox extend their lead over the Whitecaps in the East to three games. With Cotuit and Hyannis losing, the Sox now have the best record on the Cape, a title that has been with Cotuit since the summer began.

Y-D opens a home-and-home with the Chatham Anglers tomorrow, first visiting the A’s at Veterans Field tomorrow at 7 p.m. They’ll return to Brewster for another matchup with the Whitecaps on Sunday.