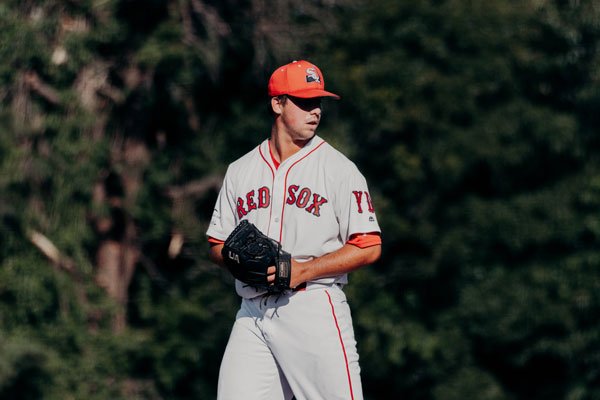 Behind another stellar start from Northeastern’s Eric Yost, who tossed six scoreless frames, the Yarmouth-Dennis Red Sox rolled to a 6-2 victory over the Bourne Braves Wednesday night at Red Wilson Field.

With the win, Y-D finished the season series with Bourne with a 3-0-1 record, an impressive performance against the current third-place team in the West Division. The win extended Y-D’s point streak to five games, and snapped a two-game tie streak for the Red Sox.

Despite not registering an RBI hit, the Red Sox put runs up in the first and third innings, then used a two-run error in the fifth to blow the game open.

On the mound, Yost started the day with 1-2-3 innings in the first two innings. In the third, a runner reached on an error before a single put two runners on with no outs. After a sacrifice bunt, catcher Fernando Gonzalez got the lead runner out with a back pick at third before Yost induced a grounder to end the inning.

Yost gave up two hits in the fourth, but induced a double-play ball to end the inning. In his last start, Yost’s infield turned three twin killings behind him. It was just the one on Wednesday, but it helped Yost out in a big spot.

“It’s awesome to have those defenders back there,” Yost said. “I know if they hit it on the ground, they’ll make the play.”

The right-hander sent the Braves down in order in the fifth, then again in the sixth. He ended his day by striking out Matt Shaw, who entered the game second in the league in batting average, on three pitches. Yost finished him off with the slider, a pitch he developed at Y-D last summer and has quickly become a huge piece of his repertoire.

“I know they have wood bats, and I know my pitches can play,” Yost said.

“His confidence, his command of his pitches, his location of his pitches,” Y-D Field Manager Scott Pickler said of what’s different about Yost this summer. “He’s feeling it now. A lot of times, people come up here and they’re thinking, ‘Hey, can I do this?’ He believes in himself right now.”

He ended the day having allowed just three hits over his six innings of work. Yost only struck out four, but kept the ball on the ground and worked around traffic with aplomb.

Offensively, the Sox got a first-inning run on an RBI fielder’s choice from Braden Montgomery. Y-D scored again on a double play in the third. In the fifth, Montgomery came up again with the bases loaded and grounded one to third base that Bourne’s Mac Horvath couldn’t field. Everyone moved up two bases, and two runs scored for Y-D.

Montgomery later added his first hit of the summer in the seventh, a single that rocketed into center field at 100 miles per hour. Pickler said it was good to see Montgomery get that first hit, particularly with him staying short to the ball and driving it.

The Red Sox scored another in the sixth on a sacrifice fly, and their sixth run of the day in the seventh on a double play.

After Yost exited the game, Zach Jacobs gave up a home run to Bourne’s Chris Brito before settling in. He struck out four over 1.2 innings, but gave up another run in the eighth on a Matt Shaw RBI single.

Shaun Gamelin came in for Y-D with runners on first and second in the eighth, and struck out Brito to end the inning. He worked back from down 3-0 in the count to sit down one of the Cape’s best power hitters. Gamelin came back out for the ninth and struck out the side in order. Pickler said it was nice to see Gamelin throwing well after rough outings his last two times out.

The Red Sox stayed four points above Brewster in the East Division standings with the win, as the Whitecaps earned a 7-2 win over Falmouth. Despite ties in three of Y-D’s last five games, the Red Sox have looked good in each game, and they hope those results start falling in their favor down the stretch.

“We’ve been playing well,” Yost said. “We haven’t been playing bad, even with the ties. If we keep doing what we’re doing, we’ll be good.”

With the season series against Bourne in the rearview mirror, the Red Sox now enter a five-game stretch against East Division foes. They travel to second-place Brewster Thursday at 5 p.m. before a home-and-home with Chatham on Friday and Saturday.