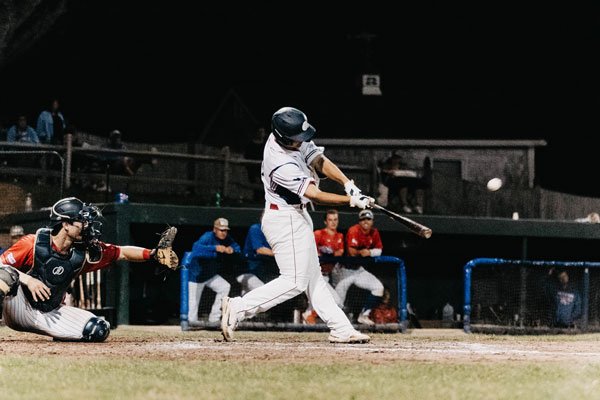 Grant Taylor kept his team in it just long enough.

With Chatham’s Ben Hampton dominating through the first four innings Friday night, Taylor did the same for the Yarmouth-Dennis Red Sox. He matched Hampton out-for-out until, finally, the Sox made a breakthrough. Jonny Long’s two-run homer in the top of the fifth broke the deadlock, and the Red Sox cruised to a 4-1 win over the Chatham Anglers at Veterans Field.

With the win, Y-D increased its lead over the Brewster Whitecaps atop the East Division standings to eight points. They also dropped their “magic number” of points to clinch a playoff spot to 10 with the combination of a Y-D win and a Chatham loss.

Taylor finished the night with seven strikeouts over his five innings of work, allowing just one run on three hits. In the first inning, Jake DeLeo reached on a leadoff bunt single and got all the way up to third, but Taylor kept him stranded by striking out Noah Ledford.

In the second, Taylor left Jack Rubenstein on second by forcing Anthony Nuñez to pop out in foul territory by the third base dugout. He gave up a two-out single in the third, but got a grounder to third to end the threat. The fourth inning brought Taylor’s first 1-2-3 inning of the night, with a flyout, a popout, and a strikeout.

“I was having fun,” Taylor said. “Good defense behind me, everyone was making plays. I was so confident.”

“The game had a good tempo,” Taylor said. “We were both making good pitches. Both sides made good plays in the field, too.”

Y-D finally showed signs of life in the top of the fifth. Hunter Haas reached on an error with one out. Moments later, Long barreled up a first-pitch cutter and sent it over the wall in right-center field for his third homer of the summer.

The “Long-ball” was Y-D’s first homer since July 2, when Long cleared the fence at Red Wilson Field against Wareham. Long said he went up looking for that cutter on the inner half, and got one over the plate on a platter.

“The past couple of games have been kind of a struggle, so to get two barrels and to see results, it’s really good,” Long said.

Now buoyed to a lead, Taylor buckled momentarily — he surrendered a leadoff homer to Rubenstein to cut the lead in half. And though he walked Nuñez next, Taylor settled back in to get the next two batters out — and Luke Shliger threw out Nuñez on a steal attempt to keep the Anglers from tying the game.

Long’s homer gave Taylor enough support to keep Y-D in the lead. The advantage on the scoreboard, along with the defense behind him, helped boost Taylor through his final inning of work.

“It was good for Jonny,” Taylor said. “He’s one of those guys I mess around with a lot and give him a hard time for not doing too hot. I’m glad he came out of his shell and hit that bomb for us to open things up. It was a good confidence booster for him, too.”

The Sox added two more in the sixth. Singles from Bush and Shliger, along with a HBP for Cole Carrigg, loaded the bases for Braden Montgomery. He delivered an RBI single to center to reinstate the two-run lead.

Y-D added another later in the inning, when Hunter Haas hit a sacrifice fly to left to score Carrigg from third.

Long nearly added even more insurance for the Y-D staff in the eighth, when he missed a second home run by a matter of inches.

“Just gotta change the direction of the ball. A little bit too much topspin,” Long said. “Gym doesn’t hurt, either.”

He settled for a one-out double to put runners on second and third, but the Red Sox couldn’t hit either runner in.

Taylor gave way to Zach Veen in the sixth. Veen was sharp in his first inning of work, but after getting two outs in the seventh he ran out of gas. He issued a two-out walk to put runners on first and second, and Y-D Field Manager Scott Pickler called for Conner Thurman out of the bullpen.

Thurman, who celebrated his 23rd birthday Friday night, ended the seventh quickly with a pop-up. He picked up two strikeouts in a scoreless eighth, then slammed the door in the ninth despite issuing a leadoff walk.

Veen and Thurman combined for four scoreless innings out of the bullpen to carry Taylor to his first win in a Y-D uniform. While the Red Sox only put up four runs, that was all they needed to extend their winning streak to three games and increase their lead at the top of the division.

The Red Sox will look to complete a home-and-home sweep for the first time all summer against Chatham Saturday at Red Wilson Field, with first pitch set for 5 p.m.