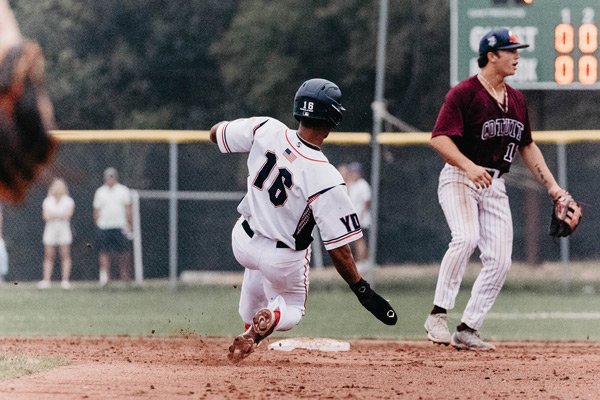 The Y-D Red Sox rebounded from a big loss yesterday with a 5-1 seven-inning win over the Cotuit Kettleers on Thursday at Red Wilson Field. Ivran Romero and Sam Klein shut down the high-octane Cotuit offense, and the Sox were able to bring home five runs, some in conventional matters, others in unique ones.

Neither offense was able to plate any runs in the first three innings, albeit both teams had their chances. The Kettleers stranded five runners on base over the three frames, including two in both the second and third.

Y-D was able to get two in scoring position with just one out in the second but wasn’t able to capitalize, stranding both.

The Sox got to Cotuit starter Harrison Cohen in the fourth, with Mike Boeve driving in Braden Montgomery to give the Sox a 1-0 lead.

Drew Dowd was originally penciled in for the start, but Romero learned this morning that he would be making the start instead as Dowd came down with an illness.

Romero had been working through a shoulder injury, missing about three weeks in between appearances. In Brewster on Sunday, his first appearance back, he only faced two batters before a storm caused a lengthy delay, forcing him out of the game.

In four innings on Thursday, Romero struck out seven and allowed just three hits without allowing a run.

“I was just trying to trust everything,” Romero said. “It’s been a while since I was off the bump and I just wanted to feel confident in my stuff.”

Klein relieved Romero after four shutout innings and gave up a pinch-hit solo home run to Tyler Johnson, the first batter he faced, to tie the game. Klein bounced back immediately and admirably, however, not allowing a hit over his final three frames.

Homer Bush Jr.’s speed led to the go-ahead run in the bottom of the fifth. After reaching on a fielder’s choice with two outs, he stole second and raced to third after the throw from Calvin Harris soared into center field.

When a 2-2 pitch to Cole Carrigg hit the dirt and bounced slightly toward the right of home plate, Bush Jr. took off, diving in ahead of the throw and giving the Sox a 2-1 lead.

In the bottom of the sixth, Luke Shliger and Montgomery got aboard with a walk and a single, respectively. Caden Connor laid down a sac bunt to move both into scoring position.

Wanting to add on an insurance run, Y-D Field Manager Scott Pickler called for a suicide squeeze. As Shliger broke down the line, Boeve got the bunt down, allowing Shliger to score to make it 3-1 and Montgomery to get to third.

After the stretch of small ball gave Y-D the lead, a Long ball put the game out of reach, as Jonny Long hit his fourth home run of the season to make it 5-1.

“It was nice to see Jonny take a full swing,” Pickler said after the game, with a raised voice to ensure Long heard, followed by the two sharing a laugh.

The Sox return to action tomorrow as they host the Wareham Gatemen in their final game before All-Star Weekend.

The Cape Cod All-Star Game is this Saturday at Spillane Field in Wareham. Tickets can be purchased on the Wareham Gatemen website.