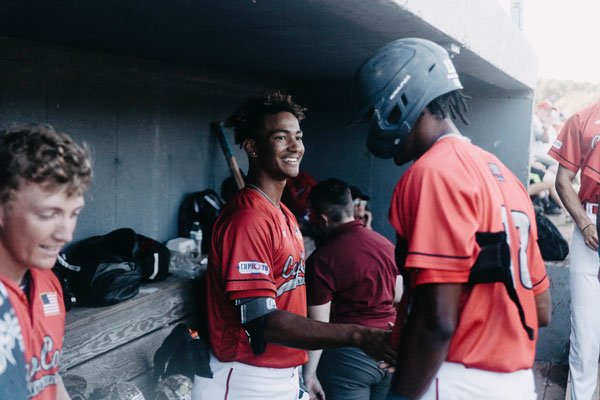 The first 11 outs of Friday’s game between the Yarmouth-Dennis Red Sox and the Wareham Gatemen moved along fairly uneventfully. Neither team had a hit and the crowd was still settling in.

Then the Sox scored seven times before the final out of the second.

That offensive explosion, capped by a grand slam from Stanford’s Braden Montgomery, propelled the Red Sox to an 11-1 win over the Gatemen at Red Wilson Field, sending Y-D into the All-Star Break with two wins on the bounce.

Y-D’s fifteen hits on the day set a new season-high, passing the 12 the Red Sox had against Bourne on June 21. The win also dropped Y-D’s magic number to one after Chatham’s loss to Cotuit. All the Red Sox need is a tie in the remaining eight games to guarantee a playoff berth.

In the second, Wareham starter Jack Sokol recorded two quick outs with a hit by pitch in between. Fernando Gonzalez walked then Zach Lew singled to load the bases. Homer Bush Jr. capitalized with a two-run single to right to break the early deadlock.

After a walk, Cole Carrigg knocked an RBI single to left to bring up Montgomery. On an 0-1 pitch, Montgomery roped the ball down the right-field line, clearing the wall and busting the game open. When the second inning began, it was a 0-0 tie. In the span of a few minutes, the Red Sox made it 7-0.

“He started me with a changeup that I was on,” Montgomery said. “Then he doubled back on it, left it over the plate, and I let it fly.”

Montgomery’s homer was his second of the summer, both of which have come at home. He’s already driven in 11 runs in just 10 games, and Montgomery has quickly become a key piece of the Y-D lineup.

“I don’t think I’ve got much more in my tank,” Schott said. “I was so late on every ball beforehand I was just like, ‘Dude, you cannot be late on a fastball’, and I wasn’t.”

Schott added to the lead again in the bottom of the fourth, lining an RBI double to the opposite field and beating the throw to the bag.

“I had a blast,” Schott said of his debut. “It beat every expectation I had of the Cape.”

In the seventh, the Sox added two more on a Carrigg double and a Montgomery sac fly.

On the mound, Grant Taylor pitched three no-hit innings with six strikeouts while walking four. Taylor excelled with traffic on the bases, but ran his pitch count up working deep in counts and was pulled after three.

Aaron Calhoun threw two more no-hit frames on the bump, striking out two and walking one in relief.

Montgomery struck out three, but allowed the lone Wareham hit on Deric Fabian’s homer. Freeberger struck out one in a 1-2-3 inning and got some help on a leaping catch from Schott in left. Carrigg finished things off with a scoreless ninth, capped by an outfield assist from Bush Jr.

“It felt good,” Montgomery said. “Just doing what I can to try and get back in the dugout as quickly as possible.”

Homer Bush Jr. set a personal season high with four hits. He also drove in two, scored twice, and walked. Montgomery struck out the side on the mound and still drove in more runs than he had pitching strikeouts. The Red Sox pitchers held a no-hitter through 5.2 innings and struck out 13 Gatemen. As they say in the business, that’ll play — all of it will, in fact, play.

The win left the Sox with good vibes heading into the All-Star Break. The 11 runs tied a season high, the 15 hits set a season-high, and the seven-run second inning was the most runs Y-D has scored in a single inning all summer.

“Other than [Columbia’s] Ivy League Championship, it doesn’t get better than this. The guys are awesome,” Schott said of a game where he had quite a bit of fun. “3-for-4, 0-for-4, it was a blast.”

The Cape League All-Star Game is Saturday at 6 p.m. at Spillane Field in Wareham. The Red Sox will have eight All-Stars suit up for the East Division team.