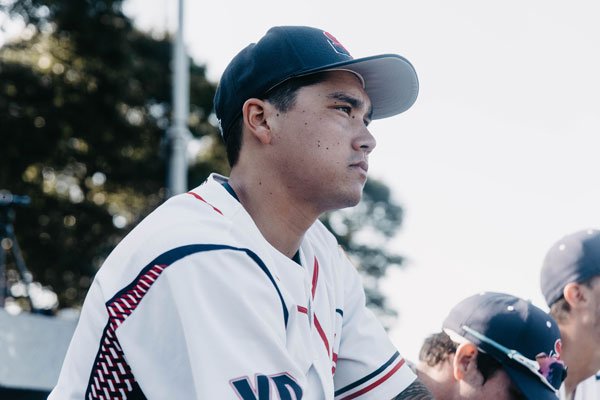 The Yarmouth-Dennis Red Sox needed reinforcements. They had just 11 active position players for a July 10 game against Chatham, leaving field manager Scott Pickler with a difficult lineup to assemble and just two options off his bench. So, while watching pre-game batting practice at Red Wilson Field, Pickler dialed a number — and connected with a familiar voice.

Four hours before a cross-country flight out of California, Zach Lew picked up the phone. The Cal State Fullerton infielder was already on his way to Yarmouth — but not to play baseball. Lew was set to join his aunt, uncle, and cousins for a relaxing vacation on Cape Cod. But when his former coach called him up requesting backup, Lew traded in the swim trunks for baseball pants.

“You can’t really say no, especially playing for Y-D and playing in the Cape League,” Lew said. “So I’m just taking the opportunity, and doing what I can for the team.”

A member of the 2021 Y-D team, Lew couldn’t refuse the chance to play in Yarmouth again, and he had enough time before his flight to get his baseball gear packed up. He arrived in Yarmouth, was activated Tuesday, and made his season debut for the Y-D Red Sox the same night at Red Wilson Field — just two days after Pickler called him.

The La Mirada, California native played 28 games for the Red Sox last summer from June 24 to the end of the season. His parents, Garrett and Elizabeth, came up to visit during the season, and they loved the Cape so much that they bought a house in Yarmouth. While they rented it out for the summer so Lew won’t be living there, he is staying with the same host family that took him in last year.

“I was going to come here no matter what anyways,” Lew said. “Y-D has a special place in my heart. It was an awesome experience, so I wanted to come back and see what Y-D is all about this summer.”

At Fullerton, Lew hit .317 this season and earned All-Big West Honorable Mention honors. With a career .309 average and .416 on-base percentage, he’s been a consistent contributor for the Titans over his four seasons.

With rosters fully in flux due to transactions, the Red Sox have a dearth of position players. Lew can play all across the diamond — last summer, he played second base, third base, shortstop, and left field for Scott Pickler. Wherever he’s playing, Lew is ready to give it all he’s got for the squad for however long his “vacation” lasts.

“I was just going to come [to the Cape] for the week, but now hopefully I can stay for three weeks or so,” Lew said.

“I’m super pumped to have him out here,” Connor said. “We’ve both been able to experience so much together. Playing high school together, going to college, and now playing in the best summer league in the country. It’s pretty surreal.”

Lew adds to the list of returners from last summer on the Y-D squad this year. Zach Jacobs, Hunter Haas, Jared Lyons, Eric Yost, Fernando Gonzalez, and Bryce Collins all crossed paths with Lew in Yarmouth. Lew noted that while he’s certainly excited to see some old friends, he’s looking forward to meeting everyone out here while playing high-level summer ball.