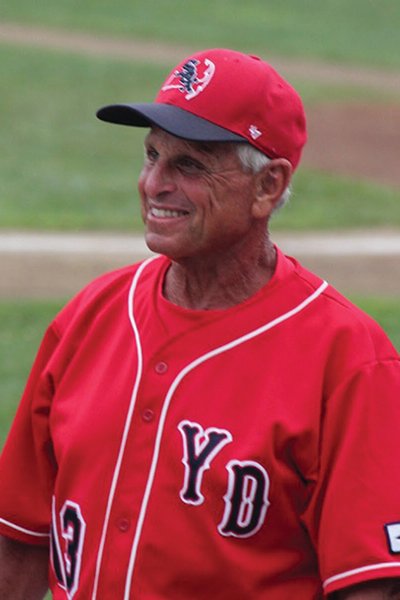 Scott Pickler, known affectionately as “Pick”, has led the Yarmouth-Dennis Red Sox as the
manager since 1998. During his tenure, the team has won six CCBL titles and has only missed the playoffs six times in his 22 years at the helm. I had the opportunity to ask the 2019 CCBL Hall of Fame inductee about his history with the team, the COVID-19 Pandemic, and his tips for success in the sport.

What was the most memorable game you have been a part of during your career?

“Probably my first championship up there, my very first championship would probably be my most memorable game.  You know what happens though, that’s truly not it.  You remember your losses more as a coach.  Truly the most memorable game is when we had a two run lead in the ninth inning against Wareham in the final game of the season at YD, and Schwarber hit at home run to tie it up then they beat us in the tenth inning.  So that’s probably the most memorable, it sounds sad but as a coach you remember your losses more than your wins.”

How do you think baseball will rebound after the Covid-19 pandemic?

“You know what, I think kids are gonna appreciate it more because it was taken away from them.  I think it’s devastating for those guys that were coming to the Cape, it’s devastating for kids going to college right now and trying to make a career, or even kids in high school to get to the college level that they put so much time into baseball and it was taken away from them.  I think they’re gonna appreciate it more, I think it’s gonna come back with a flare when it comes back and it’s gonna take some time.  But people really do miss it, it’s unbelievable, even the games that they’re watching on TV give some hope to a lot of people.  I’ve got a lot of calls from people on the cape and they say it’s like an empty summer with no games to go to.  I get calls around 5 o’clock and people say “Hey I should be on my way to your game right now” There’s a hole in the summer.”

You have seen many of your former players move on to success at the major league level.  How does it feel to see that success as their former manager?

“You know it’s awesome cause you relate your experience on the cape and what he was like and how he handled himself on the cape.  You don’t know how many times I’m watching a game with my wife, I’m watching a game with other people with friends, and I’d go “Hey, that kid played on the cape he played for Steven in Harwich,” or “Hey, that kid played for me, I could have told you that he was gonna make it to the big leagues cause of his attitude” It’s awesome cause you saw when they were 19 20 21 years old and how much they grew up, how much better they got.   That’s why the scouts call us about these kids, they wanna know their makeup and what they’re like.  I mentioned Nico Hoerner and I’m gonna mention Donny Walton, I could talk about Shane Bieber, Chris Sale, and Walker Buehler and what great team mates they were when they were at YD and how much fun they were to be around and their demeanor.  All the guys that I mentioned are right here, all of them had that big league attitude, they weren’t full of themselves, they were great team mates, and they just knew what it took to be successful you could tell that they had it, you could tell they could deal with adversity, you could tell when they were having success they weren’t full of themselves, they were great team mates, and they competed every night they got on the field.  That’s what you see at a coach, the guys who compete.  And then I see these guys on TV and everything when I’m with people and I relay those stories. Like Chris Sale didn’t want to throw inside his first game, and I said “Then you’re not gonna pitch,” and he said “I really like throwing inside.”  It’s like the guy that’s starting today for the Kansas City Royals, Kris Bubic.  He was at YD just a few years and he came in.  You know we ask them what they work on and he was a fastball changeup guy and he goes “I gotta develop a breaking ball.”  Well he had a six run lead in the fourth inning one day and we said “go out there right now, because we got a six run lead I don’t want you throwing anything but curveballs,” and he threw 16 straight curveballs.  And just because that’s what this league is about, him developing.  I’m not gonna bug him but I woulda said “hey are we gonna throw any curveballs today?” He’s making his debut today; he was in YD two or three years ago and that’s what I remember about him.  So you got all these little stories, you know these kids, it’s pretty cool.  You can go back over all these things from Buster Posey to Chris Sale to the guys that got drafted, Austin Wells and Taylor Dollard from last year.”

Which player on a different Cape Cod League team do you most wish you had the opportunity to manage?

“Oh wow.  The guy that I wish I had the chance to manage was David Fletcher who played for Orleans because he played the game so hard.  I like guys that play the game hard and come to play every day and he did that the whole time he was at Orleans when we played them. I thought David Fletcher would be that guy, I just really like the way he approached the game.”

For a newcomer to Cape Cod Baseball, what do you think is the best way to enjoy a Red Sox game?

“Without a doubt, you come to the Cape, you bring your grandkids or your kids, you send them to camp in the morning they workout with the players in the morning then you come back, go to the beach in the middle of the day, you come back and see a little batting practice, and watch a few innings of YD baseball.  And if you have kids, and you saw our players interact with your kids at camp, and then these kids come back and watch the game and you’re so close to the field and they go get their autographs, and then four years later you see that kid in the big leagues on TV and your kid’s old enough to say “Wow that’s my coach!”   The whole experience of YD with the camp in the morning, BP being so close to the field, and then post game when they can meet with the players again.”

What do you say to your team to get them ready before a big game?

“Nothing. Somebody asked me this, we’ve been to the playoffs a few times.  I don’t think you fire kids up, you bring the right kids to the yard to play a game.  I’m not a big speech guy before a big game, I go just the opposite way.  You gotta fire em up if you’re playing the last place team in the middle of the season.  You’ve gotta fire em up if you’re playing twelve games in a row without a day off.  But if you have to worry about a speech to fire guys up in a big game, lets say a playoff game or a championship game, you’ve got the wrong players. Or you’ve done a bad job the whole year long.  We go out there and we try to play the same every night, try to take the pressure off people when we get to the playoffs, and I very rarely have big speeches.  I don’t remember the last time I had a pregame talk with players. I talk to them when they first get to the cape and we’re practicing at the beginning and I tell them how important this is to their career, what I’m looking for, what scouts are looking for, and I hope you’re that guy.  You didn’t have to fire up the Walker Buehlers, the Nico Hoerners, the Justin Turners, the Buster Poseys, the Chris Sales. They went out, and that’s why they’re playing in the big leagues, they don’t need to be fired up, they don’t fire you up everyday in the big leagues, they don’t come in and say “Rah Rah let’s go kick some butt,” That doesn’t happen, you’ve got that in you, it’s built into you.  You knew the guys on your team that showed up everyday with that energy and they played the same no matter what it was, and that’s what separates guys getting into the big leagues. The calls I get from scouts is all about “make up” and what is “make up?” That this kid’s a great team mate, that this kid plays hard on a daily basis.  He knows how to go out and compete everyday of our 44 game season.  Austin Wells did that last year.   He was one of those kids.  I tried to take him out of the game because we were going to the playoffs, and he said “No coach I came here to play baseball I need to play” and that’s just who he was.  And then you get other kids who say “ Oh it’s just summer ball” it doesn’t work Those guys that say “Oh it’s just summer ball its my turn to relax, have a good time,” are the same guys that aren’t making the big leagues.”

What is the best advice you can give to young players looking to succeed in the sport?

“You’ve gotta have unbelievable work ethic that you wanna make yourself better, there’s no easy way to doing this.  The higher you go in this game the smaller the funnel gets. So you better keep getting better and keep making adjustments at level you go to. You go from high school to college the funnel’s smaller, you go from college to the cape the funnel’s smaller there’s only 10 teams and 300 players up there, you leave the cape and god to pro ball you’re gonna get to single a, double a, the funnel’s smaller.  So, the good one’s know how to compete on a daily basis, that’s the biggest thing. The good one’s go out every day and compete.  They come and they know how to prepare themselves, they know how to be a good teammate, they know how to deal with adversity.  That’s what separates people at the next level.  And if you do that, you’ll play at the highest level that your ability says it may just be college ball, it may be double a.  Every coach, you need that coach on your side, if you play hard and you come to the yard every day and you work hard and you’ll make adjustments, you’ve got a chance that coach is gonna love you.  All these guys that I’ve got that are big, I tell them this guy’s gonna be a big leaguer, how long he’s gonna stay there? I don’t know but he’s got a great work ethic.  And I’ve told them before that this guy’s lazy, he’s got god given talent but this guy over here is gonna pass him by because this guy makes better adjustments and plays harder. That’s how it goes.”

Though the ballparks have remained empty this summer, rest assured that when baseball on Cape Cod returns, it’ll return with a “flare” and Coach Pick will be there to lead the next generation of baseball stars for Yarmouth-Dennis.

1 thought on “2020 Interview with Coach Pickler”