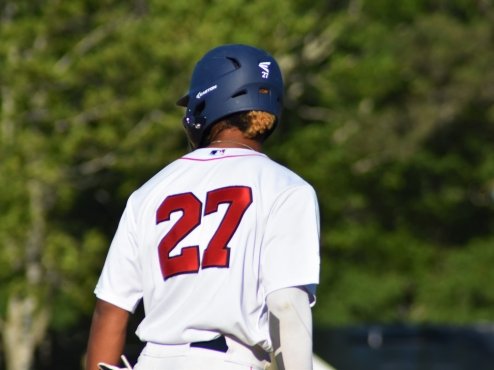 SOUTH YARMOUTH ? The Yarmouth-Dennis Red Sox kept their unbeaten streak alive on Thursday, tying the Hyannis Harbor Hawks 7-7 in a game that was called due to darkness.

Blair Henley (Texas) made his Cape Cod League debut in Thursday?s contest. The 2018 All-Big 12 selection had a solid debut, allowing just two earned runs and striking out four in his 3.2 innings of work. Unfortunately for Henley and the Red Sox, the defense was less-than-stellar, committing two errors in the first two innings that led to two unearned runs.

The bats made up for the early defensive miscues, though, scoring a run in the second on a Luke Waddell (Georgia Tech) RBI groundout. The Sox added two more in the third; Zach Ashford (Fresno State) came around to score on a Quin Cotton (Grand Canyon) single and Noah Campbell (South Carolina) on a Jonny DeLuca (Oregon) sacrifice fly.

After three innings, the score was even at three.

In the top of the fourth, Y-D manager Scott Pickler called upon Tommy Mace (Florida) to make his Cape League debut out of the bullpen. Mace entered the game with runners on first and second and two out and allowed one of the inherited runners to score before Reese Albert (Florida State) made an outstanding catch in right field to save at least one run and an extra-base hit.

The bats got Henley off the hook once again in the bottom of the fourth. Matthew Dyer (Arizona), who started at first base on Thursday, knocked an RBI double to right-center to plate Waddell and even up the score once again.

Mace couldn?t hold the lead in the fifth. The Florida product allowed a leadoff single, retired the next two hitters via fly out and then walked three straight batters to let in Hyannis? fifth run of the day. Braden Comeaux (Rice) added runs six and seven with an RBI single before Mace got out of the inning.

The Red Sox answered with two in the bottom of the fifth, capped off by an RBI double off the bat of Vito Friscia (Hofstra). Friscia finished the day 2-4 with two doubles and an RBI.

The two teams traded zeroes from then on until the Red Sox evened up the score once more in the 8th courtesy of an RBI double from Ashford that scored Andrew Daschbach (Stanford) from first.

The Offense that Keeps on Rolling

Three separate Red Sox hitters had multi-hit games on Thursday, including Quin Cotton, who went 3-5 with a run and an RBI. Cotton is now hitting .347 on the year and has nine hits in his last 19 PA.

Zach Ashford, who played hero on Thursday, had two hits of his own. His 12 runs scored this season are second on the team behind Andrew Daschbach.

The Y-D offense ranks first in the league in batting average and on-base percentage after Thursday?s games. Y-D hitters have also struck out the least of any team on the Cape this season.

Reese Albert?s diving catch in right field to save at least one run in the top of the fourth. Had Albert not gone full extension and made the catch to save a run for Tommy Mace, Zach Ashford?s game-tying RBI would not have tied the game.

The Sox are back in action Friday, July 6th, against Harwich. First pitch at Red Wilson Field is scheduled for 5 p.m.