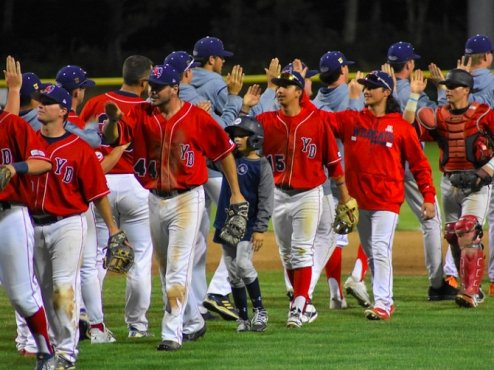 HYANNIS ? The fireworks weren?t scheduled to go off until 9 p.m. in Hyannis, but the Yarmouth-Dennis Red Sox scored six or more runs for the third consecutive game Wednesday en route to a 7-2 victory over the Hyannis Harbor Hawks.

The Red Sox got on the board early, scoring two runs in the first inning on RBI singles from Reese Albert (Florida State) and Nick Quintana (Arizona).

Brant Hurter (Georgia Tech) made his fourth start of the season for Y-D but ran into trouble almost immediately. After Matthew Barefoot (Campbell) reached base on a fielder?s choice, Trevor Hauver (Arizona State) ripped a double to deep right field. The Hyannis third-base coach sent Barefoot all the way home, but a strong relay throw from Noah Campbell (South Carolina) made it home in time to tag the runner out and keep the Harbor Hawks off the board.

Hyannis wouldn?t have to wait long to get on the board though, as Todd Lott (Louisiana Lafayette) launched an opposite-field home run to right field to make it a 2-1 ballgame.

Neither team scored in the third, but Kyle Wilkie?s (Clemson) RBI single in the fourth brought home Lott to even the score at two apiece. Hurter?s night was over after four, and he allowed seven hits, two runs, a walk and three strikeouts in his four innings of work.

The game remained tied until the sixth inning when Christian Koss (UC Irvine) brought home Quintana with an RBI single to left. Y-D wasn?t done though, and David Hamilton (Texas) ripped a double down the right-field line that scored Jonny DeLuca (Oregon) and Koss.

It was a breakout game for Hamilton, who reached base three times and knocked in three runs in just his fourth game of the season.

?I was struggling early, so it feels good to finally contribute like I know I can,? said Hamilton after the game.

The fireworks began to go off at 9 p.m. while Hyannis was batting in the home half of the ninth. It was distracting for everyone on the field, especially Hamilton, who said: ?Every time I heard a noise, I looked up because honestly, I love fireworks.?

Fidel entered after Hurter and allowed only a single hit in just over an inning of work. Kessler, one of Coach Pickler?s trusted high leverage arms, struck out three without allowing a hit in his two innings. Madrigal came in to relieve Kessler after he struck out the leadoff man to begin the eighth. He allowed two hits and ran into some trouble in the ninth, but secured the final three outs via the strikeout to end the game.

All three have been terrific thus far for Y-D, and the bullpen?s continued success could be the difference maker come playoff time.

David Hamilton?s two-RBI double in the sixth inning. Hamilton made his fourth start of the season and picked up his first RBI?s of the summer. The clutch double put the Red Sox ahead for good Wednesday. The All-Big 12 Second Team performer figures to be a mainstay atop the lineup for the first place Red Sox.