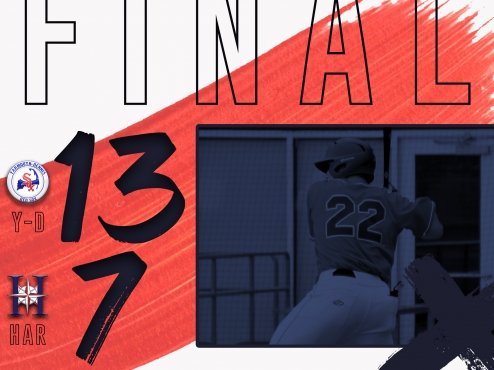 SOUTH YARMOUTH ? After falling just short of a win the night before, the Red Sox defeated the Harwich Mariners on Saturday. The Sox high powered offense won 13-7 and scored an abundance of runs early on in the game.

Following a scoreless first inning, Y-D put up a 6 spot in the second. The first three men got on base, loading them up for Noah Cardenas (UCLA). He came through with an RBI single, followed by another one off the bat of R.J. Yeager (Mercer). After Wyatt Young (Pepperdine) drove in a run on a fielder?s choice, both Austin Wells (Arizona) and Jack-Thomas Wold (UNLV) joined the party with run-scoring hits of their own. Wells scored on an error, giving the Red Sox a healthy 6-0 lead.

It didn?t last long, however, as the Mariners responded in the very next inning with 5 runs. Although Red Sox starter Ledgend Smith (Oklahoma) was on the mound while all of these runs crossed the plate, only one of them was earned. He gave up a leadoff home run to start the inning, but an error led to the rest of the damage. Smith would go on to give up 7 hits, strike out 5 batters, and walk two batters over 4.2 innings of work.

For the second time of the game, Cardenas came to the dish with the bases loaded and no one out. For the second time of the game, he came up big. A double in the gap scored two runs and gave the Red Sox an 8-5 lead. It didn?t stop there; Yeager drove in a run with a sacrifice fly. Brad Beesley added a run with a single, just before the last run of the inning crossed the plate on a Wold sacrifice fly.

Sam Hall (Clemson) capped off the high scoring night with a two-run double in the seventh to give Y-D a 13-5 advantage. The Mariners did score one run in both the eighth and the ninth, but it was too little too late. 13-7 was the final as the Sox earned a much needed victory.

They are now 21-16-3 this summer with only four games remaining on the schedule. The Anglers hold a three-point lead over the Red Sox in the standings, while Orleans is four points out of second place. Y-D will head to Cotuit to take on the Kettleers at 5:00 P.M. on Sunday at Lowell Park.