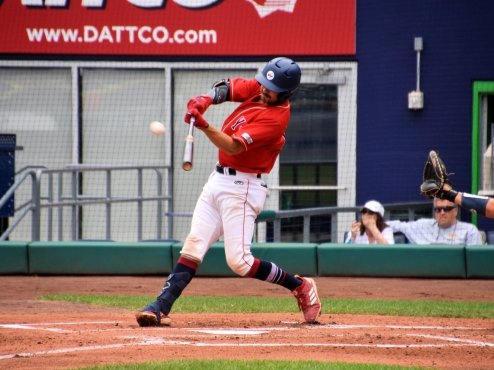 COTUIT ? One night after piling on 19 hits and 12 RBIs in a 13-7 win against the Harwich Mariners, the Red Sox offense stayed hot in a 9-1 win against the Cotuit Kettleers, as six different players had a multi-hit game and all 11 players to have had a plate appearance reached base at least once. Jack Jett (Hofstra) pitched 3.2 scoreless innings to get the win in his first appearance for Y-D.

The Y-D offense was on fire at Lowell Park last night, accumulating 15 hits, nine RBIs, and six walks as opposed to just one strikeout. Cotuit, on the other hand, recorded just five hits, one RBI, and three walks.

Brad Beesley (Cal Poly San Luis Obispo) went 2-4 with a home run, two runs, an RBI, and a walk. Austin Wells (Arizona) went 2-3 with a sac fly, two doubles, a run, an RBI, and a walk. After going 0-4 against Harwich on July 26, Wells has gone six for his last seven and has reached base in seven of his last eight trips to the plate ? bringing his average up to .333. Noah Campbell (South Carolina) went 3-4 with two runs to up his batting average to .320, and Carson Taylor (Virginia Tech) went 2-5 with a three-run bomb. Riley King (Georgia) and Tate Samuelson (Cal Poly San Luis Obispo) both went 2-4 with an RBI, and Sam Hall (Clemson) and Noah Cardenas (UCLA) each recorded a base hit.

The Red Sox were just as outstanding defensively. Reliever Brady Corrigan got the start ? his first of the season for the Red Sox. The Arizona State product went three innings and gave up just two hits and two walks. Jett, who joined the roster this week, gave up just one hit and one walk and struck out three in 3.2 innings to get the win. Michael Weisberg (Cal State Fullerton) shut the door on the Kettleers, giving up just two hits and one run in 1.1 innings of work.

King flashed some serious leather at third base, recording four putouts and two assists. He made a running catch over his shoulder halfway down the third baseline in the third inning, and made several sharp plays cutting across shortstop to gun the runner out at first. King spent most of his innings in right field for the Bulldogs this spring but is expected to play more third base in his junior season.

Y-D scored the first run of the game in the top of the second inning, when Campbell smoked a single through the 5-6 hole, King beat out an infield single to deep shortstop, and Cardenas hit a Texas leaguer into shallow center field. Hall then hit a rocket up the middle, but King was thrown out trying to get another run across to end the inning.

Beesley mashed his third long ball of the summer over the left field fence in the third inning, and the Red Sox made it a 5-0 ballgame in the fifth inning on two hits. Palmer was hit by a pitch, Wells ripped his second double of the day down the right field line, and Taylor hit his second three-run bomb in three games.

The Red Sox showed no mercy in the seventh inning, tacking on another three runs on five hits. Beesley singled into right field, stole second base, took third on an error by the Cotuit catcher, and scored on a sac fly by Wells. Three straight singles by Taylor, King, and Samuelson made it an 8-0 game. Four straight walks to Ron Washington (Pittsburgh), Beesley, Wells, and R.J. Yeager (Mercer) in the eighth inning made it a 9-0 game.

Cotuit scored one run on two hits, a hit by pitch, and a sac fly in the bottom half of the eighth inning, but that?s all the Kettleers could muster before the game was called due to darkness. The 22-16-3 Red Sox are now just one point behind the first-place Chatham Anglers and will take on the third-place Orleans Firebirds tonight at Red Wilson Field at 4:45 p.m.

Austin Wells? Case for MVP. The Arizona phenom has been the Red Sox?s best player and one of the most impressive players in the entire Cape League all summer. The MVP finalists will be announced later this week, and it?s likely that Wells is at least in the conversation. In 144 at-bats through 39 games, the All-Star is hitting .333 with 23 runs, 48 hits, 13 doubles, seven home runs, 26 RBIs, 21 walks, and eight stolen bases. If you examine his spray chart, the left-handed hitter uses the entire field and has a tremendous amount of power going the other way ? something most players struggle with, especially in a wooden bat league. Wells has only made one error all summer and has played a plethora of positions for the Red Sox: catcher, all three outfield positions, first base, and he almost made an appearance at shortstop when Wyatt Young (Pepperdine) took a day off last week. He?s tied for third in the league in the home run category with seven, and is fourth in RBIs with 26. His batting average is currently fifth in the league. Whether or not Wells is named an MVP finalist within the Cape League this week, he?s certainly ours.