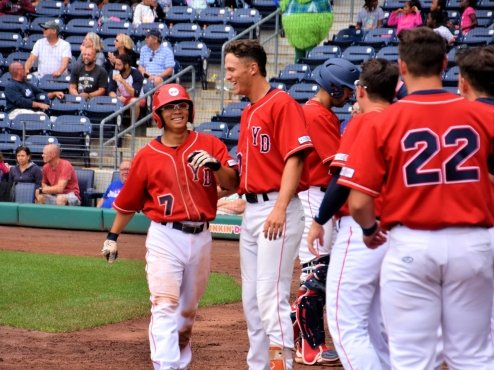 HARWICH ? A three-run blast by Carson Taylor (Virginia Tech) in the fifth inning and a two-out RBI single by Wyatt Young (Pepperdine) in the ninth gave the Yarmouth-Dennis Red Sox a 4-4 tie with the Harwich Mariners last night. Erik Tolman (Arizona State) got the start for Y-D and pitched ?five solid innings, and Jacob Winger (High Point) threw two scoreless innings to bring his ERA down to an impressive 1.10.

Tolman struck out four batters and gave up four hits, two runs, and two walks in five innings of work. His ERA has gone down in each of his last four starts and now sits at 4.00. In 27 innings pitched, he?s recorded 31 strikeouts compared to just 11 walks. He?s also batting an impressive .313 with a double and two home runs in just 16 at-bats for the Red Sox. Y-D will rely on him as one of the team?s top three starting pitchers ? and potentially a pinch hitter ? when playoffs begin next week.

Carlos Lomeli (St. Mary?s) struggled out of the bullpen, giving up two runs on four hit and one walk in one inning. Oscar Carvajal struck out one batter and gave up one hit in one inning, before Winger came in and pitched two dominant innings to close out the game. He struck out three, walked two, and gave up one hit ? in the absence of Taylor Dollard (Cal Poly San Luis Obispo), who reached his pitch limit last week, Winger has emerged as Red Sox Manager Scott Pickler?s go-to closer. In 16.1 innings of work, Winger has induced 21 strikeouts compared to just six walks and nine hits given up.

On the offensive side, Young ? leadoff man and Cape League batting title leader ? went 2-5 with the RBI single that tied the game up in the last inning. He?s now hitting .353; Zach DeLoach (Texas A&M) of Falmouth is hitting .346, Dusty Baker (California Berkeley) of Wareham is hitting .342, and Max Troiani (Bentley) of Orleans is hitting .342 as well.

Jack-Thomas Wold (UNLV) went 2-4 with a double, and Taylor drew a walk and ripped the three-run long ball that gave the Red Sox a chance to stay in the ballgame. The top of the lineup struggled last night as Brad Beesley (Cal Poly San Luis Obispo) went 0-5 with three strikeouts and Austin Wells (Arizona) went 0-4, but the bottom of the lineup carried their weight, as Taylor, Riley King (Georgia), Jake Palmer (UC Irvine), and Sam Hall (Clemson) each recorded a hit or at least reached base.

The Red Sox scored three runs on four hits in the bottom of the fifth inning. King hit a bloop single into right field and Palmer laid down a perfect bunt single down the third baseline before Taylor recorded his first hit with Y-D, a three-run shot over the right field fence to make it a 3-2 game.

After giving up two runs on four hits, the Red Sox got out of the seventh inning on an outstanding diving catch and double play by Wold at first base. Y-D remained composed in the ninth inning, as Palmer worked a walk and took second on a passed ball. Hall drew a walk, and Young smacked a two-out RBI single into right field to tie the game at four.

Winger sat the Mariners down in the bottom half of the inning, recording two strikeouts and inducing a pop-out to the catcher.

The Red Sox are now five points behind the first-place Chatham Anglers and four points ahead of the third-place Orleans Firebirds. They?ll get another crack at the Mariners today at 4:45 p.m. at Red Wilson Field. The remainder of Y-D?s home games will start at 4:45 instead of 5.?