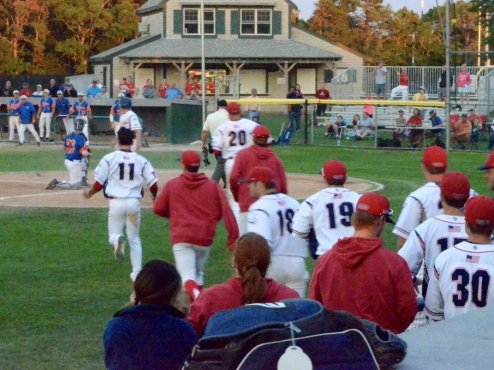 There was one out in the bottom of the ninth, and the bases were juiced. Brown had his first at-bat of the game after being a defensive replacement in the eighth. It was a 1-1 count as Brown laid down a beautifully placed bunt, as JJ Muno (California Santa Barbra) barely beat Chris Hudgins? (Cal St Fullerton) tag at the plate to win the game.

It was an offensive battle with 15 runs scored and 22 hits between both clubs.

Y-D?s Dillon Persinger (Cal St Fullerton) went 4-for-5 with three singles and a double and Will Toffey (Vanderbilt), who has been swinging a red-hot bat, went 2-for-4 with two RBI.

On the opposing side, Jordan Rogers (Tennessee) batted 2-for-3 with two home runs and six RBI. rnrnY-D picked up an early 3-0 lead in the second inning, after a two-RBI single by Tyler Houston (Butler), and an RBI single by JJ Schwarz (Florida).

However, this lead was quickly shattered in the top of the third after a grand slam by Rogers. Followed up by a Brett Netzer (North Carolina Charlotte) solo blast into the trees.

Hyannis added some cushion to their lead in the top of the fifth, with Rogers? two-run home run to right-center. This put the Harbor Hawks up 7-3.

During the bottom half of the fifth, Y-D had an answer of their own. Deon Stafford Jr. (Saint Joseph?s) started it off with a single, and Toffey stroked a two-run blast into right, putting the Red Sox within two.

The Red Sox struck again during the next frame. Persinger got the offense started with a one-out single, and with great base running, stole second. A single by Brendan Skidmore (Binghamton) scored Persinger, pulling the Red Sox within one. Skidmore would also ultimately score on a balk, tying the game at 7 apiece.

The win went to Calvin Faucher (UC Irvine, 1-0), who tossed a perfect ninth inning for the Red Sox. Garrett Cave (Florida International, 0-2) was hooked with the loss for Hyannis.

Y-D faces off against Hyannis at McKeon Park at 6 p.m. on Monday.