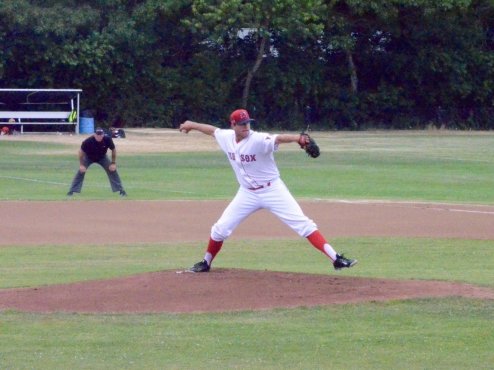 HYANNIS, Mass. ? The Yarmouth-Dennis Red Sox dropped Monday night?s contest against the Hyannis Harbor Hawks in a game that was reminiscent to Y-D?s victory the night before, but with the teams reversed.

Like Hyannis did on Sunday night, Y-D got out to a quick four run lead, but the Harbor Hawks were able to chip away and eventually tie the game. The Red Sox?s bullpen struggled, and Hyannis grabbed the lead in the late innings and held on for the win. James Harrington (New Mexico, 1-0) earned the win, while Connor Seabold (1-1) was tagged with the loss.

Pat Vanderslice (0-3, Saint Joseph?s) made his fourth start of the season for the Red Sox. Entering the game, he had posted a 4.20 ERA and 13 strikeouts across 15 innings of work, and walked only one. While Vanderslice?s ERA was higher than average, he had a very high BABIP, or Batting Average on Balls In Play, at .292.

Studies at the major league level show that a pitcher has very little control over his BABIP, and random fluctuations in it can greatly impact their ERA. This suggests that Vanderslice may have fallen victim to some bad luck in his first three starts, and has likely performed better than his surface statistics indicate.

Opposing Vanderslice on Monday night was Anthony Gonzalez (1-1), who recorded a 2.84 ERA in a mix of starts and relief appearances as a sophomore at Michigan State. He had made four starts for Hyannis this summer and totaled a 4.41 ERA, but struggled in his most recent outing against Falmouth.

As a result of intelligent, aggressive base running orchestrated by manager Scott Pickler, the Red Sox were able to manufacture a run in the top of the second. With one out in the inning, Will Toffey (Vanderbilt) was drilled in the knee by a pitch from Gonzalez. Pickler called for a hit-and-run with Matt Winaker (Stanford) at the plate, and he hit a ground ball to the second baseman.

This normally would have been a double play, but because Toffey was running on the pitch, Ford Proctor (Rice) could only get the out at first. JJ Muno (California Santa Barbara) followed with a hard ground ball past Cody Henry (Alabama) at first, scoring Toffey and giving Y-D a 1-0 lead.

The Harbor Hawks responded, however, in the bottom of the third. Henry and Cody Hudgins (California State Fullerton) started the inning with two singles to left field, and Henry came around to score after a throwing error on the tail end of a double play attempt. The Red Sox got out of the inning without further damage after a diving play by Winaker at first.

As they often do, Y-D exploded for four runs in the top of the fourth inning. Toffey stayed hot at the plate, hitting a hard ground ball up the middle for a single with one out in the inning. Winaker then hammered a double to left field that one-hopped the fence, which allowed Toffey to score from first base. Muno tallied his second RBI of both the game and the season, lining a single to left and driving in Winaker. A throwing error brought two more runs home for Y-D and the Red Sox extended their lead to 5-0.

Hyannis responded again in the bottom of the fourth, pushing across three runs on four hits and chasing Vanderslice from the game. Zach Rutherford (Old Dominion) was hit by a pitch to lead off the inning, and after a lineout, three straight singles gave the Harbor Hawks their second run of the game. Dylan Busby (Florida State) then laced a two-run single to left, scoring Trey Truitt (Mercer) and Chris Cullen (South Carolina Columbia) and cutting the Red Sox lead to 5-4.

But, the Harbor Hawks were able to complete their comeback in the bottom of the fifth. After getting a quick out, Collin Snider (Vanderbilt) issued two walks, and Truitt tied the game with a single.

The Harbor Hawks took the lead in the bottom of the eighth for good, pushing across the go-ahead run on back to back doubles by Henry and Hudgins. Jordan Rodgers (Tennessee) later smashed a two run single with the bases loaded, giving Hyannis an 8-5 lead.

The Red Sox went down in order in the top of the ninth, and Garrett Cave (Florida International), the losing pitcher in last night?s matchup, earned the save.

Vanderslice looked excellent in the first two innings. He was keeping hitters off balance by pitching ?backwards? to them, and tallied two strikeouts. But, as runners got on and he was forced to work out of the stretch, hits compounded and the Hyannis hitters were able to get to him.

The Y-D offense was shut down after the fifth inning, as Winaker was the last batter to reach base after he walked with two outs in the fifth. Harrington and Cave combined to strike out six Red Sox batters over four shutout innings to end the game.

Despite the loss, the Red Sox are still in sole possession of third place in the East Division. They are two points behind the Orleans Firebirds, and six back from the division-leading Harwich Mariners.

The Red Sox will be back in action tomorrow evening at Red Wilson Field, taking on the Brewster Whitecaps at 5 p.m.