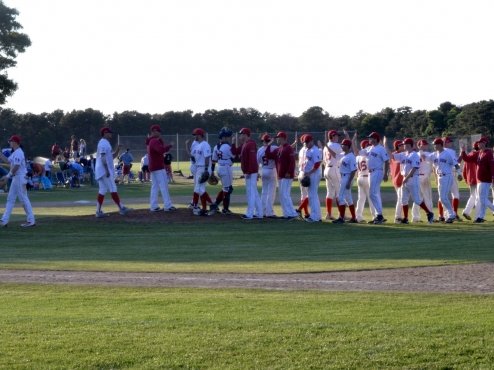 FALMOUTH, Mass. ?? The Yarmouth-Dennis Red Sox (10-9) earned a come-from-behind victory over the Falmouth Commodores (10-9) on Saturday night by a score of 3-1. After being shut out through six innings, the Y-D offense came alive late and battled back from a 1-0 deficit.

Oliver Jaskie (Michigan) pitched well in 4.2 innings of work, and Connor Seabold (1-0) earned the win for Y-D. Mikey Diekroeger (Stanford) and Will Toffey (Vanderbilt) both tallied multiple hits, with Toffey driving in the go-ahead run in the top of the ninth.

Saturday marked Jaskie?s first start of the season for the Red Sox. As a sophomore at the University of Michigan, he posted a 3.19 ERA over 79 innings for the Wolverines last season. Jaskie made great strides in his development as a pitcher last year, and was an NSCA Strength and Conditioning All-America selection at the end of the season.

Opposing him was Brady Singer, who was also making his first start of the season. Singer was a second round selection by the Toronto Blue Jays out of high school, but instead elected to attend the University of Florida. Singer had a 4.95 ERA last year in primarily relief appearances, and tallied 38 strikeouts in 43.2 innings.

Both pitchers looked excellent in the game, limiting base runners and effectively pitching out of difficult situations. Jaskie?s lone blemish came in the third inning, as the Commodores pushed across a run on a solo home run by Trevor Larnach (Oregon State). Singer pitched six shutout innings for Falmouth, striking out two and holding the Red Sox to one hit.

But, Singer was lifted from the game after throwing only 64 pitches, and the Red Sox were able to capitalize in the top of the seventh. With two outs in the inning, Toffey reached on a bunt after confusion in the field between reliever John Sparks (Austin Peay) and catcher Tyler Lawrence (Murray State). He then stole second without a throw, moving into scoring position. Diekroeger hit a hard ground ball back up the middle, past the diving second baseman and into center field, scoring Toffey and tying the game at one run each.

Seabold (Cal State Fullerton) made his first appearance of the season for the Red Sox, pitching a scoreless inning in the eighth. He struck out one, and sat just below 90 mph with his fastball.

The Red Sox offense heated up late, however, as they scored twice in the top of the ninth to take a 3-1 lead. Deon Stafford Jr. (Saint Joseph?s) walked with one out, and quickly stole second. Brendan Skidmore (Binghamton) followed with a walk, which was enough for manager Jeff Trundy to bring in Steve Villines (Kansas) to pitch.

Villines has a deceptive delivery, as he pitches from a submarine arm slot. However, it wasn?t deceptive enough for Toffey, who crushed a double into left-center field which scored Stafford. After fouling off four pitches, Matt Whatley (Oral Roberts) followed with a sacrifice fly to left field to add an insurance run and extend the lead to 3-1.

Bryan Pall (Michigan) shut down the Commodores in the bottom of the ninth inning to earn his third save of the season. With the victory, Y-D moves to 10-9, which is their first winning record of the year.

Overall, Jaskie looked solid in his first outing for the Red Sox. According to Frankie Piliere, he sat between 90-92 mph with his fastball and featured a ?tight? slider between 84-87 mph and a diving changeup that was clocked between 83-86 mph. Jaskie added his slider to his arsenal relatively recently, as he was developing the pitch coming into his freshman year at Michigan. This start was very encouraging, and it gives the Red Sox another strong arm at the front of the rotation.

The Red Sox will be back in action on Sunday, taking on the Hyannis Harbor Hawks at Red Wilson Field at 5 p.m.