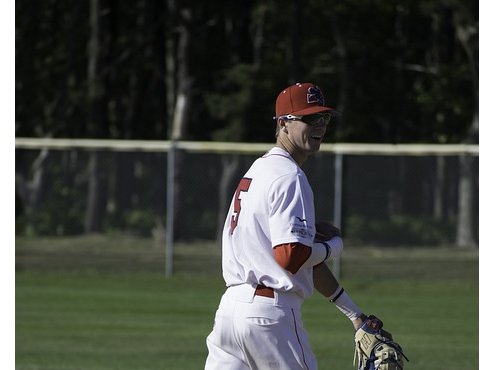 The Yarmouth-Dennis Red Sox dispatched the Bourne Braves on Opening Day of the Cape Cod Baseball League by a score of 10-9 thanks to a walk-off single by Matthew Dyer.

Dyer, a catcher by trade, was thrust into action as the starting first baseman for the Red Sox in Tuesday?s season opener. The redshirt sophomore went 3-4 with an RBI in his first game action in over a year.

?It?s a been a long time since I?ve played?over a year,? said Dyer after the game. ?So to come out and have a solid performance today helps me to keep going and to know that I belong here and I?m ready to take on what this summer is, so I?m excited.?

Zach Ashford, Jimmy Govern, and Adam Kerner joined Dyer as the other Red Sox with at least three hits on the day. Ashford stuffed the stat sheet, going 4-5 with three runs, an RBI, and a steal. Govern made similar work of Braves pitching, going 3-5 with two steals, an RBI, and two runs, including the game-winner. Kerner went 3-5 with Y-D?s lone homer.

?Ashford had a big day at the plate,? manager Scott Pickler said after the win. ?The guy they put on the mound at the end of the game had great numbers. I thought [Matthew] Toke did a great job getting on base. Govern [singled] and Dyer put the ball in play and that did it.?

Michigan State?s Mason Erla started the season opener for Y-D. After allowing two consecutive baserunners to start the game, the redshirt sophomore retired nine Braves in a row to get him through the third. He stumbled a little in the fourth inning before giving up a three-run bomb to Bourne designated hitter Anthony Prato in the fifth. Still, Pickler sang Erla?s praises after the game.

?I thought my starter was good. But he might have gotten tired in the fifth inning.?

Y-D walked it off in the next inning. A leadoff walk by Matthew Toke, who came around to score on Jimmy Govern?s long single to the left-center gap, started the rally. Third baseman Nick Quintana grounded out to the pitcher ahead Govern?s single, Kerner?s strikeout looking and Dyer?s eventual walk-off.

With game one in the books, Coach Pickler and his Red Sox are hungry for more.

Play of the Game:

Matthew Dyer?s walk-off single in the bottom of the ninth to score Jimmy Govern from second. Dyer?s single clipped third base and bounced over Bourne 3B Oscar Serratos? head to end the ballgame.

The Red Sox are back in action tomorrow, Wednesday, June 13th. They host the Chatham Anglers for a 5 p.m. start at Red Wilson Field.