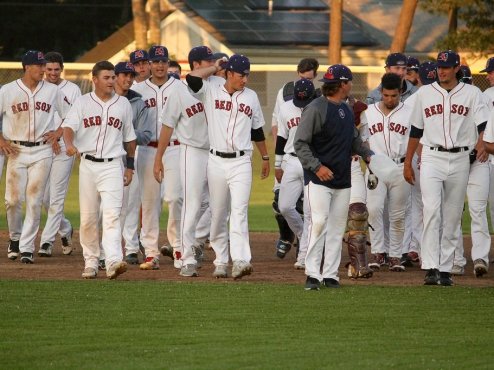 After a heartbreaking loss to the Brewster Whitecaps ended the pursuit of a fourth straight Cape Cod League Championship in 2017, the Yarmouth-Dennis Red Sox are back with a vengeance.

Veteran manager Scott Pickler will be at the helm for Y-D. Returning for his 21st consecutive season with the Red Sox, Pickler has already enjoyed a wildly successful run. He has led his team to six Cape League Championships, including a run of three straight from 2014-2016.

The Head Coach Emeritus of the Cypress College Chargers, Pickler was one of the most well-respected community college coaches in the nation and the recipient of the 2016 CCCAA Coaching Achievement Award. Notably, over 70 of Pickler?s former players on the Cape have gone on to play in the Major Leagues.

He?ll be joined on the bench by assistant coaches Roberto Mercado, Dan Jaffe, and Drew Linder ? as well as pitching coach Christian Wonders.

While the Red Sox do return some key players from last season?s squad, the majority of the roster is made up of newcomers not only to Y-D, but to the entire Cape Cod League.

Mendoza struggled in his first year on the Cape but is coming off a strong sophomore season in which he started all 62 games for the Seminoles, hitting .313/.440/.491 with seven home runs. The Third-Team All-ACC performer was recently mentioned as a possible Day One pick to monitor for the 2019 MLB Draft by FanGraphs.

After a disappointing freshman campaign in 2017, Koss broke out on the Cape last summer and led Y-D with a .309 batting average. He parlayed that success into a .287 mark for the Anteaters in 2018, a huge improvement on his freshman year average of .180. Koss garnered an Honorable Mention recognition in the Big West and figures to be an integral part of the Y-D infield this season.

Quintana?s season ended when Arizona failed to receive an at-large bid to the 64 team College World Series. But by virtue of missing the postseason, he figures to be in the Opening Day lineup for the Red Sox.

An All-Conference selection in the Pac-12, Quintana hit .313 for the Wildcats this season while primarily playing third base. He tied with Stanford shortstop Nico Hoerner, who was selected by the Chicago Cubs with the 24th overall pick in the 2018 MLB Draft, for the team lead in home runs last season with six. He was also mentioned as a potential 2019 Day One pick by FanGraphs and will be looking to turn the positive momentum into a big performance on the Cape this summer.

Zubia was named to the All-Big 12 First Team after hitting .313/.441/.566 with five home runs during conference play. Hamilton received All-Big 12 Second Team honors for his work with the glove and on the base paths. ?The inaugural winner of the 2017 Spike Owen Defensive Player of the Year stole 10 bases for the Longhorns and was caught just once during conference play.

Daschbach was an All-Conference selection in the Pac-12 after slugging a team-leading 17 home runs for the Cardinal. Campbell hit .272 and started 42 games for the Gamecocks in his freshman campaign. Matthews finished the 2018 season with a .381 on-base percentage, tied for second on the Ducks.

Though the Red Sox don?t return any outfielders from last season, the incoming class has the makings of a potentially special group.

Cotton was named the WAC Player of the Year after hitting .390 and racking up 13 stolen bases for the Antelopes. His 19 doubles led the team, as did his .462 on-base percentage and .573 slugging percentage. Cotton will be a major force in the middle of the Y-D lineup and a mainstay in right field.

Albert had a successful freshman season for the Seminoles, hitting .268 with seven home runs in his 44 starts. Ashford led the Bulldogs with a .352 average and recorded a team-high 18 doubles. DeLuca was second on the Ducks with 32 runs batted in despite hitting just .212.

Spearheading the Y-D pitching staff will be returning pitchers Karl Kauffmann and Tommy Henry, both of whom pitched for the Sox last season.

Kauffmann and Henry will attempt to bring the dominance they showed at Michigan this season to the Cape. Kauffmann, after leading all Y-D starters in ERA (minimum four games started) last season, kept on rolling at Michigan where he logged a 3.08 ERA and a club-high 78 strikeouts.

Henry righted the ship after his struggles on the Cape last season, pitching a team-leading 81.2 innings with 78 strikeouts, a 3.09 ERA, and a 7-3 win-loss record for the Wolverines in 2018. Kauffmann and Henry finished fifth and sixth, respectively, in strikeouts among all Big Ten pitchers.

The Red Sox will have no shortage of top MLB prospects on their roster. Blair Henley, who led all University of Texas starters in ERA this season with a 3.32 mark, is expected to join Y-D later this summer after Texas? run in Omaha comes to a close. Henley was named to the All-Big 12 Second Team for his performance with the Longhorns in 2018.

Tyler Madrigal, a left-handed pitcher from St. Mary?s, is attempting to follow in his brother?s footsteps and parlay his college career into a lucrative signing bonus. Madrigal made 22 appearances (21 out of the bullpen) for the Gaels and finished the season with a 1.90 ERA and 54 strikeouts in 47.1 innings. Madrigal will be a key cog in the Red Sox bullpen this summer and should see high-leverage work right out of the gate.

The University of Florida and the University of Oklahoma are sending two pitchers apiece to Y-D this summer. Jack Leftwich and Tommy Mace will make their way up to the Cape once Florida?s time in Omaha is finished, and Nathan Wiles and Braidyn Fink will come up from Oklahoma.

The pitching staff is likely to be one of the strengths of the Y-D roster this summer. Henley, Leftwich, and Mace should be among the league?s top pitching performers and ? assuming they all throw enough innings on the Cape ? will be in contention for the league?s prestigious P.F.C. Whitehouse Award, which is given to the best pitcher on the Cape.

The first game of the 2018 season will take place on Tuesday, June 12th, as Y-D will host the Bourne Braves with first pitch scheduled for 5:00 P.M at Red Wilson Field. The Red Sox will then play one more at home before heading on the road to Orleans.