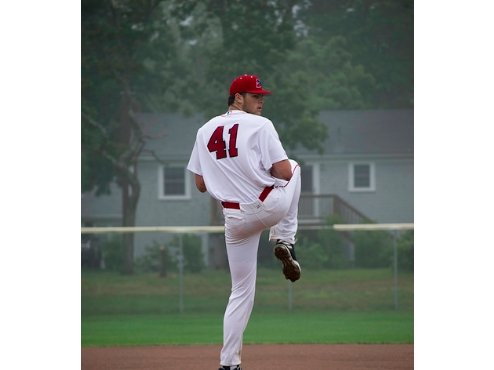 The Yarmouth-Dennis Red Sox had a chance to walk it off for the second game in a row but were ultimately unable to score the winning run in the bottom of the ninth inning, resulting in a 1-1 tie against the Chatham Anglers.

After striking out Vito Friscia to begin the inning, Chatham pitcher RJ Freure issued three free passes to Micah Pries, Nick Quintana, and Matt Dyer to load the bases with just one away.

Georgia Tech shortstop Luke Waddell stepped up to the plate with a chance to be the hero after entering as a defensive sub in the eighth. With heavy clouds and fog lingering all evening and darkness quickly approaching, manager Scott Pickler knew the game wouldn?t be going to extras, no matter if the score was tied after nine.

Pickler had to get creative and instructed Waddell to lay down a squeeze bunt in an effort to push across the winning run.

After fouling off his first attempt and looking at ball one, Waddell squared around, only to pop the ball in the air to Freure, who then threw to third for the game-ending double play.

Brant Hurter, a collegiate teammate of Waddell?s at Georgia Tech, got the start Wednesday for Y-D. The 6?6? left-hander was terrific for the Red Sox in his Cape League debut, striking out six and allowing just four hits in his five innings of work. The only blemish came via a solo home run from Anglers shortstop Greg Jones (UNC Wilmington).

Pickler was impressed with Hurter, despite the homer: ?I thought [Hurter] was very good. He left one pitch up and that was the only thing that hurt him. I thought he competed; he gave me five good innings.?

Sam Kessler (West Virginia) and Alec Marsh (Arizona State) were both brilliant in relief of Hurter. Marsh struck out five Anglers in his two innings, including Spencer Torkelson, a fellow Sun Devil and the National Freshman Hitter of the Year.

?It felt good [to strike Torkelson out],? said Marsh after the game. ?I went in there knowing that I was going to face him, and it?s just a friendly competition. He?s one of the best hitters I?ve ever seen, so I pumped it up a little bit for him.?

Despite a disappointing finish to what looked to be another exhilarating win, Coach Pickler is ready to roll against the Orleans Firebirds tomorrow.

?I?m looking forward to every day,? he said.

Play of the game:

With a runner on third and the Anglers threatening, Jake Snider stepped up to the plate looking to bring home the go-ahead run. Left fielder Charlie Concannon had other ideas though and made an incredible diving stop in foul territory to keep the game tied at one apiece.

The Red Sox are back in action tomorrow, Thursday, June 14th. They head to Eldredge Park to take on the Orleans Firebirds in their first road game of the 2018 season. First pitch is scheduled for 7:00 P.M.