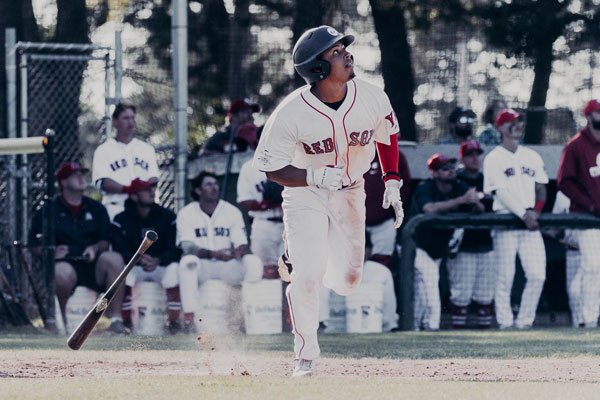 It took a few innings for the Yarmouth-Dennis bats to get going. Three, to be precise. Once the scoreboard ticked over to the fourth, it was a different story.

The Y-D Red Sox put up five runs in the bottom of the fourth inning, capped by a huge two-run double from Western Carolina’s Pas Ferreras, to overturn a 4-0 deficit and run away with an 8-4 win. The game was called after eight innings due to darkness.

After starting the season 0-3-1, the Red Sox are now 4-0-1 in their last five games and remain tied for first place in the East Division.

“We’re finally coming together as a team and as a brotherhood,” Ferreras said. “The guys are getting to know each other more and more, and it’s helping on the field.”

The Red Sox couldn’t solve Bourne starter Bryce Cunningham in the first three innings, with the only runners getting on base doing so via a walk and an error. After a Matt Shaw home run to center in the top of the fourth, the Red Sox trailed, 4-0.

But Mike Boeve led off the fourth inning with a single, followed by a fielder’s choice and then a Caden Connor base hit. Jonny Long finally got Y-D on the board with an RBI single to left, his team-leading sixth RBI of the summer.

Jordan Thompson drew a walk to load the bases for Ferreras. In his first game back after missing four games with a hand injury, Pas Ferreras came through. He lined a double to left field which one-hopped the wall, scoring two runs and getting the Red Sox right back in it.

“[Cunningham] threw Jordan Thompson three straight sliders,” Ferreras said. “In the back of my mind, I’m thinking ‘Okay, I don’t think he’s going to throw a fastball’. So I was sitting slider. I saw it up, and put a good swing on it.”

Ferreras’ double set the stage for Homer Bush Jr., who tapped a grounder right back in front of the plate but used his blistering speed to beat out the throw. The ball ricocheted off his back and into right field, allowing two runs to score and for Y-D to take the lead.

Bush Jr. had a phenomenal game for Y-D. The Grand Canyon University outfielder was activated before Monday’s doubleheader, in which he played a supporting role with two appearances off the bench. But he had a starring role Tuesday, going 3-4 with 2 RBI, two runs, and a whopping four stolen bases.

With the lead established, Y-D needed to keep the Braves off the board. Enter Zach Veen, who, in his first appearance of the summer, worked out of a jam in the fifth.

Veen gave way in the sixth inning to Shaun Gamelin, who shut the Braves down the rest of the way home. Gamelin threw three scoreless innings without allowing a hit, striking out six in the process.

“I was just doing my job,” Gamelin said. “My job is to go in there to get outs and make pitches, and I think I did a pretty good job of that tonight.”

Y-D added two runs in the sixth on a Mike Boeve bases-loaded walk and a sac fly from Luke Franzoni, then one more in the bottom of the eighth on a Boeve RBI single. With the sun set and the sky darkening, the umpires made the decision to call the game after eight innings and seal Y-D’s fourth win in the last five games.

Garrett Gainous earned the win for Y-D, striking out seven batters in four innings while allowing four runs in his second start of the summer.

The win also brought Y-D field manager Scott Pickler one win closer to the all-time Cape League record. Pickler, who entered the season with 534 wins under his belt, now sits just one win shy of tying the current record of 539 career victories, and two shy of breaking it.

The Red Sox have a shot to get win No. 539 Wednesday, when they host the Orleans Firebirds at Red Wilson Field. First pitch is set for 5 p.m.

1 thought on “Y-D storms back to beat Bourne, 8-4, behind five-run fourth inning”