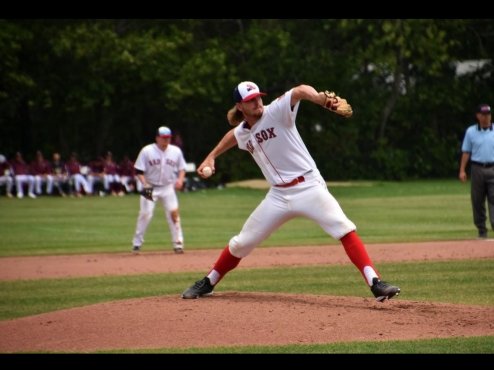 SOUTH YARMOUTH ? The Red Sox went one and one in their Sunday afternoon double header against the Falmouth Commodores. Both games entailed a lot of offense and constant action from the start of the day until the very end. Boyd Vander Kooi (Arizona State) was on the mound for game one, while Carlos Lomeli (St. Mary?s) got the start for game two.

In game one of the two game set, the back and forth affair resulted in a 9-6 loss for the Red Sox. The Commodores? bats were hot right from the get-go, as they jumped off to an early 3-0 lead in the home half of the first inning.

After nothing was doing for either team in the second, Yarmouth-Dennis quickly began to erase the 3-run deficit in the third. It started with Jackson Greer (East Tennessee St.) reaching base with a single in his first at bat on the Cape this summer. Brad Beesley (Cal Poly) then ripped a double; allowing Luke Waddell (Georgia Tech) to bring Greer home and earn an RBI as he grounded out. Austin Wells (Arizona) continued to swing his hot bat as he smacked a double off the wall which scored another run for the Sox. Andrew Eyster (South Carolina) tied the game up at three runs apiece with a bloop single. The damage still wasn?t done, not until Wyatt Young (Pepperdine) roped an RBI single which gave the Red Sox a 4-3 lead.

The Commodores answered right away, scoring two runs in the home half of the third to regain the lead at 5-4. They scored once again in the fourth, right before Eyster had something to say. He hit a two-run blast in the fifth inning to tie the game up at 6-6; the ball traveled 430 feet to dead centerfield.

Vander Kooi?s day ended after a seventh run crossed the plate in the fifth inning with no one out. Although seven runs scored on his watch, only four of them were earned. He also struck out four batters while walking two. Taylor Dollard (Cal Poly) took over and went on to pitch one scoreless inning with two strikeouts.

Ledgend Smith (Oklahoma) took over for Dollard and although he gave up two runs, he struck out two batters as well. Falmouth won game one 9-6, but Y-D was ready for revenge in the second game of the set.

The Red Sox jumped out to an early lead when Jack Wold (UNLV) hit a two-double in the top of the first inning. It gave Lomeli a comfortable 2-0 lead to pitch with right from the start of his day.

After Noah Campbell (South Carolina) hit a single and eventually advanced to second base, Eyster drove him in with a single of his own. The two South Carolina Gamecock teammates are continuing their success from school here on Cape Cod.

Lomeli was having a dominating performance through the fourth inning, and his team took a 3-1 lead into the home half of the fifth. In just one swing of the bat the game changed, as Hayden Cantrelle (Louisiana) hit a three-run home run to give the Commodores their first lead of the ball game, 5-4.

With one down in the sixth, Eyster finished off his excellent day at the dish with his second home run of the day. Between the two games, he had four hits, five RBI, and two home runs. After that tied things up at 5-5, the Red Sox were ready to rally. Tate Samuelson (Cal Poly) got on with a single, and made it all the way to third base on an error. That allowed Riley King (Georgia) to drive in the go-ahead run with a clutch single. Riley Tirotta (Dayton) kept it rolling with an RBI double. Drew Swift (Arizona State) laid down a beautiful bunt, and instead of going to first, the pitcher attempted to make a play at the plate. The throw sailed over the catcher?s head, allowing two runners to score and opened this game wide up at 8-4.

Chase Smith (Pittsburgh) came in to pitch in relief for Lomeli in the middle of the fifth inning and he was outstanding. He gave up no runs, no hits, no walks, and struck out two batters over two and two-thirds innings of work. Smith got the win as the Red Sox won game two of the double header, 8-4.

Y-D will travel to Bourne tomorrow to play a makeup game against the Braves at 7:00 P.M. at Doran Park.