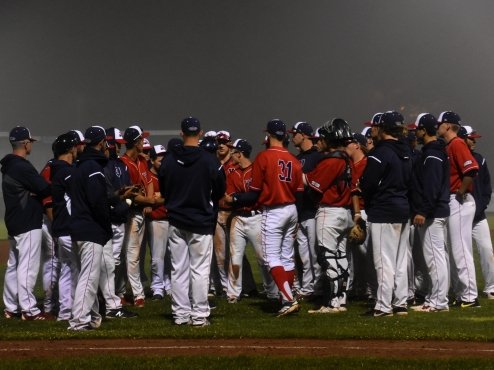 SOUTH YARMOUTH ? The Yarmouth-Dennis Red Sox managed to play six-and-a-half innings against the Chatham Anglers Saturday evening at Red Wilson Field before the game was cut short due to lightning and a hailstorm ? many long-time Cape residents in the crowd were appalled at the sight of hail, saying it hasn?t hailed during a Massachusetts summer in over a decade. The red-hot Y-D offense cooled down, recording just four base hits and two runs in the game. The Chatham offense got five runs across, but because the game was called before the completion of the seventh inning, the final score of the game reverted back to 4-2.

Drew Swift (ASU) and Austin Wells (Arizona) were the top producers at the plate today. Swift went 1-2 with a run and the team?s only RBI, while Wells went 1-2 with a walk. Riley King (Georgia) and Luke Waddell (Georgia Tech) were the other two Red Sox to get a base hit.

Y-D?s only productive inning was the second inning, when they scored two runs off of two hits and an error. King mashed a line drive into center field and then stole second base. With two outs, Swift smoked an RBI line drive into right field, and then took second as the Chatham right fielder attempted to throw out King at home plate. The next batter, leadoff hitter Brad Beesley (Cal Poly San Luis Obispo), smacked a grounder that the Chatham first baseman failed to backhand cleanly, allowing Swift to make it a 2-0 ballgame.

The Anglers responded in the top of the third inning. Tyler Doanes (WVU) singled up the middle, Kaden Polcovich (Oklahoma St.) dropped a Texas leaguer into shallow left field, and Spencer Torkelson (ASU) ? who many baseball analysts predict will be a top-five pick in next year?s draft ? roped a two-RBI double down the third baseline to make it a tie ballgame.

In the top of the fifth inning, Chatham?s Ben Ramirez (USC) drew a 3-2 walk before taking second on a passed ball by Wells. A liner off of Doanes? bat allowed Ramirez to advance to third, prompting Y-D Head Coach Scott Pickler to call Tolman in from the bullpen to take over for Seymour. Tolman?s first batter, Polcovich, hit a weak fly ball down the first baseline that Sam Hall (Clemson) made a nice play on. However, Ramirez tagged on the play, giving Chatham a 3-2 lead.

Chatham scored a fourth run in the top of the sixth inning, when Ramirez took Tolman deep over the center field fence. Beesley timed the ball up perfectly and made a spectacular effort to rob Ramirez, but the ball grazed the top of his glove.

?The 4-3-1 Red Sox will take on the 3-3-1 Falmouth Commodores in a doubleheader tomorrow at Fuller Field. First pitch is scheduled for 3 p.m.