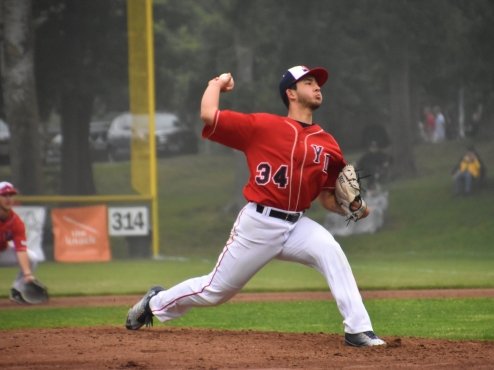 BOURNE ? On the same night that former Yarmouth-Dennis Red Sox pitcher Tommy Henry pulled Michigan within one win of the national championship, Trent Denholm (UC Irvine) and John Beller (USC) were sensational for the Red Sox, combining to toss a two-hit shutout against the Bourne Braves at Doran Park. Denholm gave up just one hit up and collected three strikeouts in the first four innings of the game. Beller was lights-out the remainder of the night, giving up one hit and striking out eight to secure the 2-0 victory.

Denholm took the mound Monday night for the last time as a member of the Red Sox. Later this week he will travel to Cary, NC, to try out for the USA Baseball Collegiate National Team. He needed just 34 pitches to get through the first three innings of the game, as he no-hit the Braves until the top of the fourth inning, when Zavier Warren (Central Michigan) hit a soft liner just over the glove of R.J. Yeager (Mercer), the Y-D second baseman. After throwing three scoreless innings against the Orleans Firebirds last Thursday and four scoreless innings last night, the total number of scoreless innings that Denholm has thrown in his Cape League career stands at 32 and 2/3 innings. Denholm said he was aware of the statistic, but paid it no mind.

“I don?t really think about it much,? he said. ?I just try to do the same thing every day and get guys out. I just trust my stuff every day.?

Following a series of scrimmages that will double as tryouts, Denholm has a chance to proudly wear USA across his chest, a dream that every serious baseball player shares growing up.

“It?s a great opportunity, and I appreciate getting recognized and everything,? Denholm said. ?I hope to just keep rolling and continue on pace for what I?ve been doing out here.?

Both teams remained hitless until the top of the third inning, when newcomer Noah Cardenas (UCLA) ripped a one-out line drive into center field. Cardenas had a remarkable freshman year as a Bruin, hitting .375 with 18 RBIs and 17 walks in 136 at-bats. Behind the plate, Cardenas didn?t make a single error in his rookie season. He did an excellent job framing pitches last night, often convincing the home plate umpire to call borderline pitches strikes.

The Red Sox finally scored the first run of the ballgame in the top of the fifth inning. Riley King (Georgia) got things started with a base hit into center field. A couple batters later, Tate Samuelson (Cal Poly San Luis Obispo) hit a rocket of a double down the third baseline to get two runners in scoring position for Cardenas. Cardenas laid down a suicide squeeze back to Lardner, who appeared to throw King out at the plate, but King knocked the ball out of the catcher?s mitt on the slide ? the play was ruled an error by the Bourne catcher. On the very next play, Yeager laid down another suicide squeeze to make it a 2-0 game in favor of the Red Sox.

Beller came into the game in the bottom of the fifth and was absolutely filthy ? 48 of his 67 pitches thrown were strikes. The USC junior struck out two batters and retired a third in the bottom of the ninth to secure Y-D?s fifth victory of the season. According to Beller, he simply fed off of Denholm?s dominant performance.

“Trent was rolling, and for me getting loose in the bullpen, it really kind of just set the tone and gave me a lot of confidence coming in, knowing that if I hit my spots, I?m going to be able to get these guys out and trust my defense behind me ? they played good ball today,? Beller said. ?[I] just really wanted to go in there and trust my pitches, because that?s what [Denholm] was doing, and it was working for him.?

Despite the loss, the Bourne pitching staff had an impressive night as well. Starter Mac Lardner (Gonzaga) only gave up three hits and two runs ? one earned ? in five innings, while Colby Dunlop (Connecticut) and Joshua Culliver (Minnesota) each gave up just one hit and no runs. Not a single walk was issued in the two-hour game, and only four players got hits. King and Samuelson accounted for four of the five Red Sox hits ? Cardenas being the other Y-D player to get a hit. Warren, who went 2-4, was the only Bourne player to record a hit.

The Red Sox are set to play a doubleheader against the Harwich Mariners tomorrow at Red Wilson Field. Depending on incoming rain, first pitch is scheduled for 2 p.m.