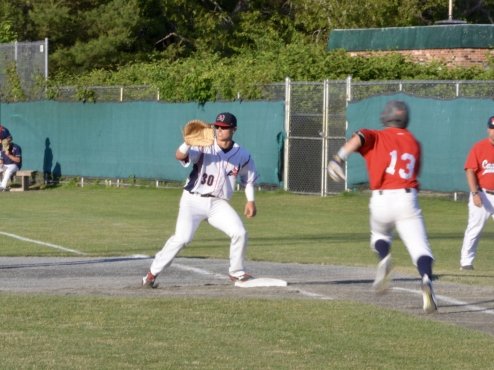 WAREHAM, Mass. ? The Yarmouth-Dennis Red Sox earned their sixth win of the season over the Wareham Gatemen on Friday night by a score of 12-4. Erich Uelmen (1-0) was excellent for the Red Sox and earned his first win of the season, and the Y-D offense came alive for 13 hits. Sean Rackoski (0-1) was tagged with the loss for the Gatemen.

Uelmen (Cal Poly) got the start for the Red Sox on Friday night. This was Uelmen?s first start of the season for Y-D (6-7), as he was activated and made a relief appearance against Harwich on Monday night. He is coming off of a stellar season at Cal Poly, where he recorded 70 strikeouts and posted a 3.68 ERA in 93 innings of work.

On the mound for the Gatemen was Rackoski (Kansas), who held the Hyannis Harbor Hawks to one run over four innings last Saturday. While he didn?t pitch deep into the game, it wasn?t because of ineffectiveness ? Wareham has shown a tendency to pull their starting pitchers before they face opposing hitters for a third time. This is likely to avoid the ?times through the order penalty?, which is the principle that each additional time a hitter faces a pitcher in a single game, the batter does better and is more likely to be productive at the plate.

The Red Sox grabbed an early lead against Rackoski, pushing across a run in the top of the first. After Matt Winaker (Stanford) looped a single over the third baseman, Y-D put on the hit-and-run with Matt Whatley (Oral Roberts) at the plate. Although Whatley grounded out to the shortstop, Winaker running on the pitch prevented Wareham from turning a double play. Brendan Skidmore (Binghamton) then lined a double to the left field wall, scoring Winaker and giving the Red Sox a 1-0 lead.

Y-D tallied another run in the top of the third, as Whatley lifted a pitch from Rackoski down the right field line that, despite the diving efforts of second baseman Cole Freeman (LSU) fell in for a double. After two ground ball outs, Whatley came across the plate to make it 2-0.

The Gatemen threatened in the bottom of the third, after Freeman beat out a weak groundball to third for an infield hit and advanced to third base on a throwing error. Uelmen then walked Alex Destino (South Carolina), but got KJ Harrison (Oregon State) to groundout to the shortstop on a 1-2 pitch to end the threat.

Mikey Diekroeger (Stanford) led off the top of the fourth with a single and Brown got hit by a pitch, and the Red Sox had runners at first and second with no one out. Colby Schultz (California Riverside) then hit a groundball to the right side of the infield, and Rackoski?s throw to first base sailed over Gavin Sheets? head. Schultz cruised around second and stopped at third, and Diekroeger and Brown scored on the play. Schultz then scored on a passed ball to the next batter and the Red Sox pushed the lead to 5-0.

Y-D added another run in the top of the fifth, when Will Toffey (Vanderbilt) scored from third on a ground ball to Nico Giarratano (San Francisco) at shortstop. Despite the infield being in, Toffey got a quick break from third and Giarratano briefly bobbled the ball before ceding the run and getting the out at first base.

Wareham tallied four runs in the bottom of the sixth, however, cutting the lead to 6-4. The Gatemen quickly loaded the bases against Bryan Sammons (Western Carolina), which prompted manager Scott Pickler to bring in Collin Snider (Vanderbilt) to relieve Sammons. After a fielder?s choice drove in the first run of the game for the Gatemen, two singles and a wild pitch pushed across the next three runs and the top of the Wareham lineup was able to capitalize on the bullpen?s mistakes.

Kevin Smith (Maryland) got two of the runs back for the Red Sox in the top of the eighth, smashing a double over the head of Wareham centerfielder Joey Bartosic (George Washington), scoring Paul Rufo (Binghamton) and Nolan Brown (Texas Christian). After Tyler Houston (Butler) walked, Winaker and Dominic Miroglio (San Francisco) hit back to back singles to drive in two more runs in the inning and the Red Sox pushed their lead back to 10-4.

The Red Sox added two runs in the ninth on a single by Houston, driving in Corey Dempster (Southern California) and Rufo. This made the score 12-4, where it would hold for the rest of the game as Sam Delaplane (Eastern Michigan) shut the door on Wareham in the bottom of the ninth.

Uelmen kept the Gatemen scoreless across five frames, and allowed only one hit while striking out five. He looked excellent all evening, blowing away opposing hitters with his fastball, which reportedly sits around 93 mph.

Uelmen?s performance was certainly encouraging for the Red Sox, not only in that it helped them get the win tonight, but for the rest of the season as well. The starting pitching has been great at times and has improved as the season has gone on, but struggled at the start of the season. The addition of Uelmen will ideally further solidify the rotation going forward.

Rufo, Skidmore and Winaker all recorded two hits on the night, and Houston reached base three times and drove in two runs. The offense regathered momentum after struggling earlier in the week against Harwich and Chatham, and look to keep it going tomorrow at Cotuit, with first pitch slated for 5 p.m.