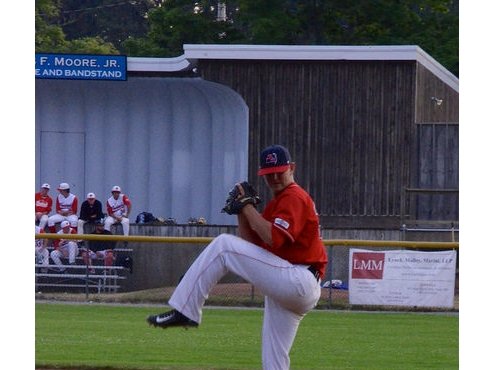 ORLEANS, Mass. ? Will Gaddis (Furman, 1-1) had an excellent outing as the Yarmouth-Dennis Red Sox beat the Orleans Firebirds, 5-1, Thursday night at Eldredge Park.

Gaddis was superb on the hill going 6.1 innings, with seven strikeouts and one earned run.? All night he was mixing his pitches well, keeping the Firebird offense off-balance.

Coming into the showdown, Gaddis had impressive numbers from his previous two starts. With a total of 12 innings pitched he had an Era of 2.25, with only one walk and 11 strikeouts. Not only that, but he has gotten first pitch strikes 61.7 percent of the batters he had faced, which leads all Red Sox starters.

There was one point in the game which summed up how impressive Gaddis was. It was the top of the sixth with no outs bases loaded. Gaddis locked in, first getting Keegan McGovern (Georgia) to fly out to shallow left field. He then struck out Will Golsan (Mississippi) and Scott Hurst (Cal St Fullerton), to get out of the inning unharmed.

Sean Guenther (Notre Dame, 1-1), who got the start for Orleans, had trouble with the Y-D offense early in the contest.

It began in the top of the third when Paul Rufo (Binghamton) reached base on an error. Tyler Houston then (Butler) hit a two-RBI home run to put the Red Sox ahead.

In the fourth frame, Will Toffee (Vanderbilt) stroked a line drive for a one-out single. Dominic Miroglio (San Francisco), then smoked a double into the right-center gap, knocking in Toffey in from first. Colin Lyman (Louisville) joined in, poking a single to center, sending Miroglio to third. After that, Rufo came to the dish hitting a single to center, advancing Miroglio home.

In the top half of the seventh inning, Lyman was aboard after being hit by a pitch. Rufo then singled, as Lyman advanced to third. A sacrifice fly by Houston sent Lyman home.

The Red Sox play against the Wareham Gatemen at Spillane Field on Friday. First pitch is at 6:30 p.m.