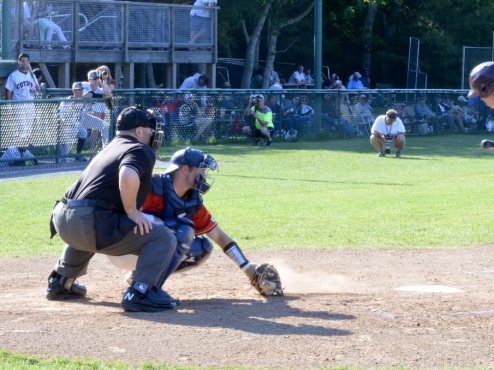 COTUIT, Mass. ? The Yarmouth-Dennis Red Sox lost in the contest against the Cotuit Kettleers, 6-3, Saturday evening at Lowell Park.

Early runs by both teams set the tone for the showdown.

The Y-D offense wasted no time, putting two runs on the board in the first inning. Tyler Houston (Butler) started it off with a leadoff single, while being able to advance to second after an error by Jeren Kendall (Vanderbilt) in center field.? After a Matt Whatley (Oral Roberts) walk, Brendan Skidmore (Binghamton) slapped a single through the hole, pushing Houston home. Kevin Smith (Maryland) smoked a line drive up the middle, which loaded up the bases.? Corey Dempster (USC) stroked a single, as Whatley crossed home, putting them to an early 2-0 lead.

In the bottom half of the frame, Cotuit answered. It began with Greyson Jenista (Wichita State) who roped a single into right. Quinn Brodey (Stanford) poked a double, as Jenista was able to make it to third.? A walk to Jackson Klein (Stanford) put the bases loaded with only one out. A sac fly hit by Ryan Hagan (Mercer) closed their deficit to one. A walk with the bases loaded set the score at two apiece. A two-RBI double by Cory Voss (Arizona) put the Kettleers ahead 4-2.

The Kettleers batted around, having five free passes aboard, with three walks and two hit batsmen.

In the top half of the fourth, Dempster reached base on a walk with one out. With great base running, he stole two bases and was able to score on a fielder?s choice by Nolan Brown (TCU).

Alonzo Jones (Vanderbilt) reached base with a leadoff walk during the bottom half of the fifth frame. He then advanced into scoring position by a slow roller hit to second by Hagen. With a beautiful piece of hitting, Klein singled, and the speedy Jones was able to score from second.

It was Jones again who sparked the Kettleers offense, this time in the bottom of the seventh. He leadoff with a single, advancing to second and third on wild pitches and was able to score on a fielder?s choice.

Mike Baumann (Jacksonville, 1-2) got the start for the Red Sox. However, his night ended early only going 0.2 of an inning. Cre Finfrock (Central Florida, 0-1) took over for Baumann on the hill pitching 4.1 innings with three strikeouts.

With the win Cotuit advances to 2-12 on the season, snapping their eight-game losing streak, while Y-D sinks to 6-8 with the loss.

The Red Sox face off against the Harwich Mariners at Red Wilson Field on Sunday. First pitch is at 5 p.m.