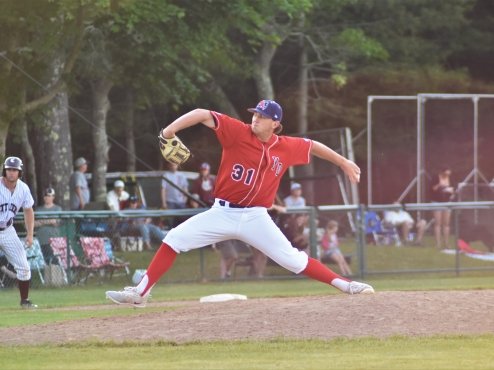 They also won the baseball game that they played shortly thereafter in convincing fashion: a 10-1 shellacking of the Chatham Anglers.

The game started off rather uneventfully; both teams traded zeroes until the top of the third inning when Jensen Elliott (Oklahoma State) allowed a run on a single, stolen base, and another single. Aside from that blemish in the third, Elliott was fantastic on the day, spinning 5.1 innings of one-run ball. He picked up five strikeouts and walked two, earning his third win of the season.

Nick Quintana (Arizona) had a one-out, two-RBI single in the bottom of the fourth to put Y-D ahead 2-1 and after that Chatham pitching fell apart. The Sox sent fourteen men to the plate in the inning, picked up five hits, two walks, and two hit batsmen. Noah Campbell (South Carolina) and Jonny DeLuca (Oregon) each had two hits in the frame and combined for two of the Y-D runs and three of the Y-D RBI in the 31-minute fourth.

Aside from the fourth, there was not a whole lot of action on either end. Chatham?s only scoring came in the aforementioned top of the third inning and Y-D added just one more run for the remainder of the game: Matt Dyer (Arizona) scored when Andrew Daschbach (Stanford) reached via error.

Mitchell Tyranski (Michigan State) was called upon in relief of Elliott and pitched spectacularly. After struggling through his first five outings of the season with a 12.38 ERA, Tyranski threw 3.1 innings of scoreless baseball with five strikeouts, three hits, and one walk. Despite the fact that Y-D won by nine, Tyranski was credited with his first save of the season because he threw three-plus innings of relief to close out the win.

Quin Cotton?s leaping catches in the fourth and sixth inning. Twice the Anglers sent hard-hit liners to left field and twice Cotton flew through the air to rob Chatham hitters of extra-base hits. Technically it?s two plays, but they were both that good.

The Red Sox (who, by the way, are handily in first place) return to action Monday, July 9th, against the Falmouth Commodores. First pitch at Red Wilson Field is scheduled for 5 p.m.