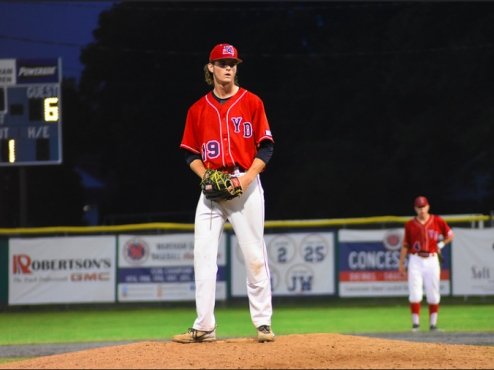 BREWSTER ? The Yarmouth-Dennis Red Sox picked up their league-leading fourth tie of the season Saturday despite going ahead by a run in the ninth inning.

It was the second tie in as many games for Y-D; they failed to play nine innings against Hyannis Thursday due to darkness as well.

Saturday?s game at Stony Brook Field was almost a carbon copy of the Hyannis game as Y-D fell behind Brewster early but rallied to come back and eventually tie things up.

The Whitecaps got on the board early, knocking Y-D starter Karl Kauffmann (Michigan) out of the ballgame before the conclusion of the first inning. Brewster scored five runs in the first, all of which were charged to Kauffmann, and extended their lead to six with another run in the second off of Trenton Denholm (UC Irvine).

Despite the early deficit, Tyler Madrigal (Saint Mary?s) knew he had a job to do. The left-handed reliever entered in the third and gave Coach Scott Pickler four incredible innings on the mound. In what was his longest outing of the season, Madrigal struck out five and worked his way around trouble to keep Brewster off the board.

Zach Linginfelter (Tennessee) struck out six in the first three innings, but ran into trouble in the fourth. The Y-D offense finally got on the board via a Quin Cotton (Grand Canyon) RBI groundout that scored David Hamilton (Texas), but that wasn?t all in the fourth. The next batter up, Reese Albert (Florida State), ripped a double down the right field line that brought home Andrew Daschbach (Stanford), who reached base four times on the evening.

The Red Sox struck again for two runs in the sixth inning, this time via another RBI groundout from Cotton and one from Luke Waddell (Georgia Tech) as well.

With the Red Sox still trailing by two runs and sunlight quickly disappearing, Daschbach sent an Owen Griffith (Clemson) fastball to deep right center field for an RBI double that scored Zach Ashford (Fresno State). Cotton hit a sacrifice fly to the second baseman that was just enough to successfully score the speedy Hamilton from third.

Clean innings from both Tristan Baker (Western Carolina) and Ryne Nelson (Oregon) kept the Whitecaps at bay, giving Y-D a chance to score the go-ahead run in the ninth.

That they did, as Albert stepped up with the bases loaded and took a Connor Grammes (Xavier) fastball on the elbow to bring home the seventh run of the game for Y-D.

In an odd twist, the umpires conferred with both managers and decided they wouldn?t have enough sunlight to play another inning, which meant the score would revert back to the last full inning of play. Ashford crossed home as the seventh run for Y-D, but the inning could not be completed and the game was called due to darkness.

With the bases loaded and two out in the fourth, Madrigal struck out Hunter Bishop (Arizona State) swinging. The Whitecaps had a chance to break the game open for good, but Madrigal closed the door and was the hero instead.

Y-D returns home to Red Wilson Field Sunday, July 8th, to host the Chatham Anglers on Sergeant Sean M. Gannon night. It will be a special night in South Yarmouth, and pre-game ceremonies are slated to start at 4:30 p.m.