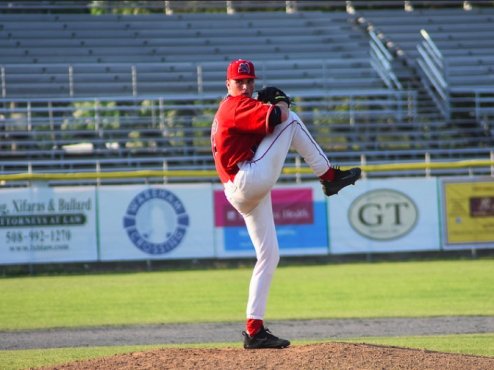 SOUTH YARMOUTH ? The Yarmouth-Dennis Red Sox lost a baseball game for the first time in over a week Monday, falling to the Falmouth Commodores by a score of 6-3.

It was an ugly game for both sides?both teams combined for eight errors?but Y-D contributed five of those and only pushed three runs across on the evening.

Tommy Henry (Michigan) made his third start of the season for the Red Sox and was put in a tough position from the get-go. After retiring the leadoff batter, Logan Davidson (Clemson), on a pop-up to David Hamilton (Texas), Henry issued a walk to Will Brennan (Kansas State).

A throwing error charged to catcher Adam Kerner (San Diego) allowed Brennan to advance to third, and an error from third baseman Luke Waddell (Georgia Tech) brought him home for the first run of the game. The error from Waddell was already costly, as an out would have ended the inning and kept the run off the board, but Falmouth took advantage of the new life.

Falmouth?s Matt Wallner (Southern Miss) was in the lineup for just the second time this season and had yet to pickup a hit. That changed in the first inning when Wallner sat on a first pitch slider from Henry and sent it over the fence in right to extend the Falmouth lead to three.

Commodores starter Adam Laskey (Duke) delivered his best start of the season allowing just a single run while striking out eight in his six innings of work.

The Y-D offense created viable scoring chances, including loading the bases in the second, but the league-leading Red Sox offense suffered a rare off day.

Falmouth extended the lead to four on a Steven Williams (Auburn) RBI single to center in the third but Jonny DeLuca (Oregon) came home on a delayed steal for Y-D?s first run of the game in the fourth.

As the sun went down, so did the defensive miscues. Both teams were kept off the scoreboard until the eighth and ninth inning but the late surge wasn?t enough for the Red Sox. After Davis Sims (Murray State) doubled home Wallner in the top half of the eighth, Zach Zubia (Texas) delivered a sacrifice fly that scored Quin Cotton (Grand Canyon). With runners on first and second and just one away, Waddell and Vito Friscia (Hofstra) were unable to bring the Red Sox within a run.

Falmouth picked up another run in the ninth to increase their lead to four but new pitcher Logan Rinehart ran into immediate trouble upon entering the ballgame in the bottom half of the inning. The first batter of the inning, Hamilton, reached base via a dropped third strike. Zach Ashford (Fresno State) was the next batter and reached on an error as well. An Andrew Daschbach sacrifice fly brought home Hamilton for Y-D?s third run of the game, but that would be all.

Coach Scott Pickler brought in Tristan Baker in relief of Henry, and he turned in his longest outing of the season, throwing 4.1 innings while allowing two runs. Baker has been one of the seasons biggest surprises and has been used in a multitude of roles, including closer. His versatility has proven extremely valuable in the Red Sox bullpen.

Tommy Henry snagged a liner off the bat of Matt Wallner for an inning-ending double play in the third. Henry displayed incredibly quick reflexes on the catch and was able to recover in time to throw on to first for the double play.

The Red Sox are back home for the final game of a three game home stand, as they?ll host the Harwich Mariners in a makeup game at Red Wilson Field Tuesday. ?First pitch is scheduled for 5:00 p.m.