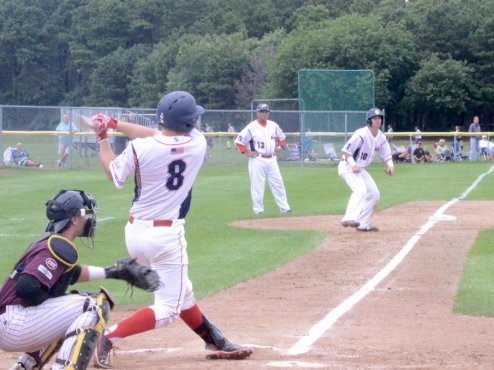 Thomas seems to fit right in with the Red Sox. He has four RBI in his first two starts, being signed just a day ago, after previously playing with the Plymouth Pilgrims in the New England Baseball League. Not only has Thomas been productive offensively, but he has also been solid defensively behind the plate.

Michael Baumann (Jacksonville, 3-3) had a strong outing for Y-D tossing seven innings with one walk and fanning one. On the strikeout, we got a glimpse of the heater that the 6?4 Baumann is known for throwing. On the 1-2 count, Baumann cranked the fastball to Ryan Hagan (Mercer) blowing it right by him.

Ross Achter (Toledo) got the start for Cotuit, tossing seven innings, with one walk and four strikeouts. Achter received the no-decision, while Connor Simmons (Georgia Southern, 2-3) was credited with the loss.

Cotuit jumped to an early lead in the first. Quinn Brodey (Stanford) reached on an infield single hit to JJ Muno (UC Santa Barbara) at second. Muno made an excellent backhand snag, but his off-balance throw took Brendan Skidmore (Binghamton) off the bag. Brodey would come around to score on a Cal Stevenson (Arizona) RBI single to left.

After four scoreless innings, Y-D broke the silence in the sixth tying the game at one apiece.

Connor Wanahanen (TCU) sparked the frame with a leadoff base hit through the hole at first and crossed the dish on Will Toffey?s (Vanderbilt) 14th RBI of the summer.

The Red Sox struck again in the seventh, giving themselves a three-run cushion. Thomas came to the plate with the bases loaded, and with one crack of the bat, cleared the bases with a two-out double.

Y-D tallied two more runs in the eighth to extend their lead to five. Smith smoked a double off the center field fence, knocking in Toffey from second, and would then cross the plate on a Skidmore sac fly.

Sean Barry (San Diego), who made his first appearance for Y-D, shut the door in the top of the ninth.

Barry had a solid debut after relieving for Baumann in the eighth. He walked one and whiffed three in two innings of work.

With the win, Y-D extends to 25-17-1 on the season. Because Harwich won in their game tonight, the Red Sox are 2nd in the division heading into playoffs.

Y-D plays their last regular season game against the Hyannis Harbor Hawks at McKeon Park. First pitch is at 6 p.m.