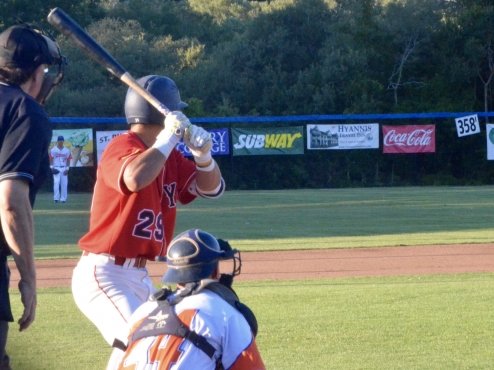 HYANNIS, Mass. ? The Yarmouth-Dennis Red Sox (26-17-1) defeated the Hyannis Harbor Hawks (17-27) in the last game of the regular season by a score of 5-1 on Wednesday night. Even though the outcome of the game had no bearing on the playoffs for either team, the Red Sox looked excellent in all aspects. Will Toffey (Vanderbilt) powered the Red Sox offense, tallying two hits and driving in two runs, while Collin Snider (Vanderbilt, 3-0) tossed five innings of one-run ball and earned the victory.

Wednesday night marked Snider?s first start as a member of the Red Sox, after making 11 relief appearances this summer. He had worked exclusively as a reliever for two years at Vanderbilt but showed no signs of faltering over five strong innings, as he allowed just four hits and struck out four.

The Red Sox got out to an early lead in the top of the first, as Toffey launched a two-run home run over the right-field fence, scoring Nolan Brown (Texas Christian). Toffey has been hot at the plate lately, getting on base in half of his plate appearances and posting a .524 slugging percentage over the last seven days.

Brendan Skidmore (Binghamton) lead off the fourth inning by hitting a 2-2 pitch from Mark Nowatnick (Florida Atlantic) close to 370 feet and cruised into second base with a double. After moving to third on a wild pitch, Matt Winaker (Stanford) drove him in with a groundout, extending the Red Sox lead to 3-0.

The Harbor Hawks responded in the bottom half of the frame, however, as Peter Zyla (Duke) lead off the inning with a single into left field. Zyla then stole second and advanced to third on a passed ball, and Cameron Esthay (Baylor) lifted a sacrifice fly to center to drive him in.

Both bullpens were dominant for the next four innings, and the score remained 4-1 until the top of the ninth. Corey Dempster (Southern California) and Brent Diaz (Louisiana Tech) reached on a single and an error, respectively, to start the inning for the Red Sox. Korby Batesole (Fresno State) then laid down a sacrifice bunt, scoring Dempster from third and advancing Diaz to second. Brown singled to left field to drive in Diaz, giving the Red Sox their fifth and final run of the game.

Activated that morning, Jason Taubl (Sacred Hart) threw three shutout innings of relief for the Red Sox. He will likely be relied on throughout the playoffs, as the bullpen has run thin due to injuries and fatigue.

While the game was irrelevant to the Red Sox playoff standings, it gave the team the opportunity to regain momentum heading into the postseason and get role-players at-bats, as they?ll likely play a key part as the month progresses.

The Red Sox will face off on Friday at home against the Orleans Firebirds in the first round of the playoffs. Oliver Jaskie (Michigan) is scheduled to start for Y-D and has posted a 0.98 ERA this summer.