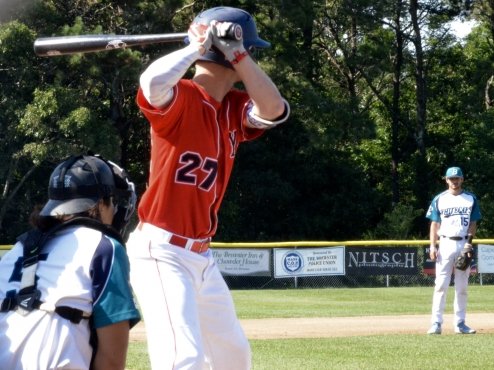 BREWSTER, Mass. ? In a game that was tied on four separate occasions, the Yarmouth-Dennis Red Sox (24-17-1) pulled out the victory against the Brewster Whitecaps (16-24-2) on Monday night by a score of 5-4. The Red Sox and Whitecaps traded runs for most of the game before Will Toffey (Vanderbilt) drove in the go-ahead run for Y-D in the top of the ninth inning. Y-D was also incredibly aggressive on the bases and was able to manufacture runs effectively.

JJ Muno (California Santa Barbara) powered the Red Sox offense, tallying three hits in five at-bats while scoring two runs. He started the rally in the top of the ninth inning with a one-out single and later came around to score the game-tying run.

Dillon Bray (Western Carolina, 1-0) made his first start of the season for the Red Sox after making two relief appearances to start his time on Cape Cod. He threw 5.1 innings on Monday night, allowing three runs (two earned runs) on ten hits while striking out two batters.

Opposing Bray was Zacary Lowther (Xavier, 2-1) who has been one of the most dominant pitchers in the league, entering the game with a 2.56 ERA and 53 strikeouts in 31.2 innings. He held the Y-D offense to just one earned run in four innings of work, but required 82 pitches to do so and was relieved entering the fifth inning.

The Red Sox offense needed little time to warm up, as Matt Winaker (Stanford) lead off the second inning with a single, and scored from second on a two-out single by new addition Joey Thomas (Cincinnati). With Deon Stafford Jr. (Saint Joseph?s) sitting out after being hit by a pitch on Sunday, Thomas got the start at catcher on Monday night and was impressive behind the plate.

Brewster benefitted from a couple unfortunate plays for Y-D in the bottom half of the inning, as Bray slipped fielding a bunt and Ryan Gridley (Mississippi State) reached on an infield hit to load the bases. Bryce Jordan (Louisiana State) lifted a sacrifice fly to center field, scoring Kekai Rios (Hawaii) and tying the game at 1-1.

The game didn?t remain tied for long, however, as Muno led off the third inning with a single into center field. With Dillon Persinger (California State Fullerton) at the plate, Muno stole second and moved to third as Persinger grounded out to Nick Dunn (Maryland) at second base. When Toffey followed with a ground ball to second base as well, Muno broke for home plate and slid across safely as the throw skipped past the catcher, giving the Red Sox a 2-1 lead.

The Whitecaps battled back and pushed across runs in the fourth and sixth innings to take the lead. Rios doubled to lead off the fourth inning and scored on a single by Gridley, and Dunn drove in Gridley in the sixth as Brewster took a 3-2 lead.

Toffey drew a one-out walk in the top of the eighth and the gears started turning again for the Red Sox offense. After Toffey stole second, Brendan Skidmore (Binghamton) hit a ?swinging bunt? that dribbled out a few feet in front of home plate. Both the catcher and the pitcher converged on the ball, and Rios threw out Skidmore at first base. But, because Rios had pursued the ball in play, he left home plate uncovered and Toffey was able to make a hard turn around third base and slide in before Rios could apply the tag, once again tying the game.

At this point, it looked like Y-D had taken the momentum in the game, but Brewster squeezed across a run in the bottom of the eighth inning on a single by Zach Gahagan (North Carolina) and retook the lead. However, the Y-D offense had enough left in them to mount a comeback in the ninth inning.

With one out in the inning, Muno reached on a single off of Jordan?s glove at first base and quickly stole second. Persinger then smashed a pitch from Landon Hughes (North Carolina) into left-center field, scoring Muno and tying the game. Toffey followed with a single past Julian Infante, who had replaced Jordan at first base, scoring Persinger from second and giving the Red Sox the lead.

Calvin Faucher (California Irvine, 4-1) worked the bottom half of the ninth inning and earned his third save of the season. Pat Vanderslice (Saint Joseph?s, 2-4) got the win after 2.2 innings of relief, and Hughes (1-2) was tagged with the loss.

With the win, and a loss by the Harwich Mariners, the Red Sox inch closer to retaking first place in the division with just two games left to play in the regular season. Y-D can?t finish lower than second place, but if they win their last two games and Harwich loses both of their games against the Whitecaps, then the Red Sox will end the season atop the division.

The Red Sox are back in action on Tuesday night, hosting the Cotuit Kettleers for the last home game of the regular season. First pitch is at 4:30 p.m.