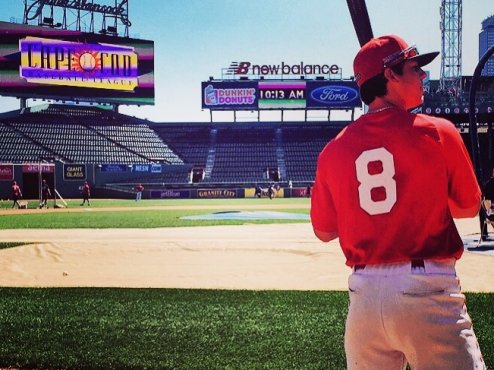 ?It was a surreal atmosphere. The whole stadium was packed. It was a great day for baseball,? he said, recalling the moment.

Unfortunately the big-league Red Sox couldn?t deliver a victory for the Cape League Red Sox lead-off man, getting outslugged by the Baltimore Orioles, 8-6. On Tuesday, however, Billingsley had the opportunity to do some slugging of his own as the Cape Cod Baseball League held their sixth annual scout day at Fenway Park.

As he was speaking to reporters after taking batting practice a ladybug landed on his neck ? re-affirming just how lucky Billingsley is to be playing at Fenway.

?A lot of kids dream to be in this position and we get to. So it?s a once in a lifetime experience. I?m really enjoying it while I?m here,? he said.

All ten Cape League teams took the field at Fenway Park to take infield/outfield practice, run 60-yard dashes, and hit batting practice in front of Major League scouts. That?s no different than any other day in the Cape League season, where scouts regularly take in games up and down Route 6.

The big exception being a 37-foot, two inch green wall staring down hitters 315 feet away. To catcher Nathan Rodriguez, from Yorba Linda, California, the intimidation of the Green Monster was palpable.

?When I stepped up to the plate about to take my first pitch and I could feel the stadium on top of me,? Rodriguez said. ?I was in awe.?

While the left-handed Billingsley peppered the ball to the notoriously vast right field and around Pesky?s Pole, Rodriguez ? a righty ? intentionally tried to stay away from the temptation of pulling the ball.

At a certain point, however, he had to leave his mark ? not only with scouts, but in the monster. He didn?t hit one out, but cracked the hollow, hard-plastic surface of the Green Monster a few times.

The loud thud echoed through the park as his teammates cheered him on.

Rodriguez caught himself at certain points thinking, ?these are the same steps so many great players before have taken?. And while those are memories that will always be with him ? and all the players who participated Tuesday ? no one will be able to undo the dents he left on the Green Monster.

Ladybug or no ladybug, that is what truly makes these players lucky.