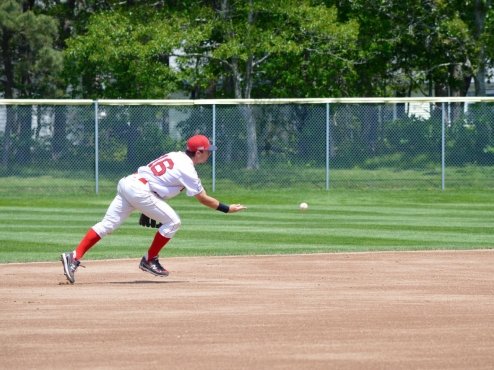 The Yarmouth-Dennis Red Sox (8-10) are currently tied for the third-worst record in the Cape Cod Baseball League, ahead of only the Falmouth Commodores (7-11), who they beat three times last week, and the Cotuit Kettleers (6-12).

Despite Y-D?s better record, the Kettleers won their matchup easily 11-1 on Monday night at Lowell Park. Cotuit used three home runs to propel themselves past the Red Sox and have now won two straight.

The Red Sox led the Kettleers 1-0 until the bottom of the sixth inning when a Cotuit rally scored five runs. Tommy Edman (Stanford) led the way for the Sox and was responsible for half of Y-D?s hits going 3-for-4. Edman was 4-for-12 over his previous four appearances and is hitting a team-high .304 on the season.

Christian Morris (Indiana) started on the mound for the Red Sox and was responsible for five of the Kettleers? runs over the course of 5.2 innings. He allowed five earned runs on seven hits, striking out two batters. Three of the earned runs came off of a three-run home run by Will Haynie (Alabama).

That was not Haynie?s only contribution to the stat line on Monday. Haynie blasted another home run to the same spot in left field against Sox reliever Chris Viall (Stanford).

Viall came in to pitch the eighth inning after Ryley MacEachern (Stony Brook) pitched 1.1 innings, retiring four of the five batters he faced, and allowed one run. Viall allowed four runs off of one walk and three hits, including two home runs.

Both the Y-D Red Sox and the Cotuit Kettleers will spend the Cape League off-day tomorrow at Fenway Park working out for MLB scouts. The Red Sox continue Cape League play on Wednesday at 5 p.m. when they host the Chatham Anglers (10-8) at Red Wilson Field.