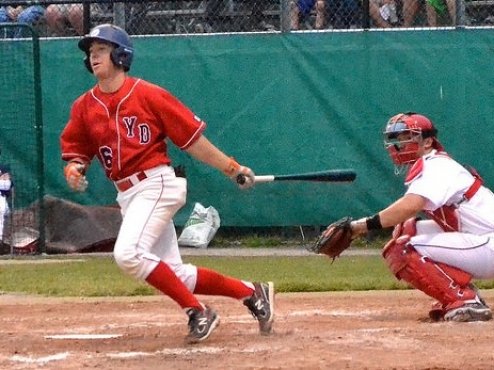 SOUTH YARMOUTH ? The Red Sox (9-10) scored six runs in the seventh inning Wednesday evening, powered by a lead-off home run by shortstop Donnie Walton (OK State), to lay the smack down on the Chatham Anglers (10-9) for the second time in four days, 9-2.

The win lifts the Red Sox out of the cellar in the East Division and two points behind Chatham for third place.

Everyone got in on the action as all the starters in the lineup reached base at least once. In four of their eight innings, Y-D sent up a minimum of five batters with the team batting around in the sixth.

Walton, after struggling at the plate last week, turned in a 3-for-4 performance with two runs batted in and two runs scored to lead the way offensively for the Red Sox. Center fielder Stephen Wrenn (Georgia) and designated hitter Gio Brusa (Pacific) both notched multi-hit games.

That was plenty for Sox starter Brett Adcock (2-2 / 4.12 ERA), who didn?t have his best stuff on the evening but put forth a gritty performance to earn his second straight victory. The Michigan man has struggled with control on the Cape through four starts and it showed early ? working the count full to three of the first four hitters. Yet the Anglers couldn?t capitalize on the early miscues before Adcock settled down.

He had retired eight of nine batters through the third, fourth and fifth innings before surrendering a 2-out solo home run to Anglers right fielder Luke Persico. He followed up the homer by striking out the designated hitter Corey Raley on four pitches.

He wouldn?t record another out, however, as Adcock walked the lead-off man in the top of the sixth, then gave up a single to the catcher Aaron Barnett before falling behind shortstop Zack Short 3-0. He finished the day with five walks, four strikeouts and three hits while only giving up one run.

Adcock was bailed out by reliever David Ellingson (Georgetown), who was able to get three straight ground balls to third to end the threat and the top half of the inning with a 2-1 lead. Ellingson pitched three scoreless innings allowing only a single while striking out two ? putting a stop to any Anglers comeback.

The Red Sox were then able to cash-in on a series of Angler errors, who committed five on the day. In the bottom half of the sixth Michael Donadio (St. John?s) singled, reached second on a passed ball and then scored on a failed double play attempt by Short to regain the two-run lead at 3-1.

After Walton?s lead-off homer to left-center in the bottom of the seventh. Will Toffey (Vanderbilt) then walked for the third time of the day followed by a bunt single by Wrenn. Pinch-hitter Luke Bonfield sent a grounder through the wickets of second baseman Kyle Brooks, scoring Toffey in the process, while the throw home from Persico in right got passed Barnett allowing Wrenn to score from second and Bonfield to reach third on the two-error play.

Back-to-back walks by Donadio and catcher Michael Papierski (LSU) loaded the bases for Cole Billingsley (South Alabama), who hit a rope over Brooks? head into right field for a 2-RBI single ? making the game an 8-2 rout. Walton then plated Papierski with a deep sacrifice fly to give the game it?s final score of 9-2.

It couldn?t have been a better welcoming to newcomer Toffey, who was activated before the game following a run to the College World Series final against eventual-champion Virginia. The Barnstable native walked three times and struck out in his only official at-bat.

On the other corner of the infield, Ryan Noda (Cincinnati) continued to swing a hot bat as of late. After lifting the Red Sox to a victory against Chatham on Sunday with his go-ahead two-run home run, Noda broke the 1-1 tie in the bottom of the third with a bases loaded walk. He also doubled high off the fence in center in the second inning. Over his last three games the first baseman is three-for-eight with three RBIs.