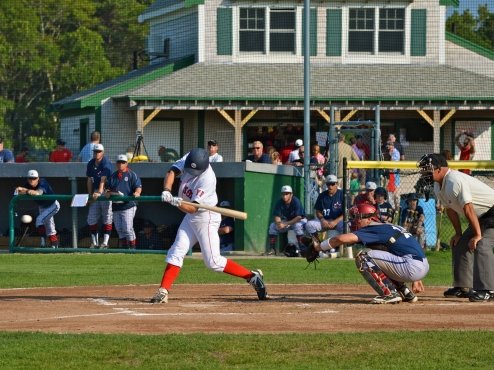 Andrew Stevenson (LSU) went 3-for-4 in Sunday night?s game, with one RBI and a run scored. Stevenson also made a few incredible defensive plays. Photo by Kyra McDonald/Y-D Red Sox

For the first time since July 25, 2013, Y-D ended a game in a tie.? The Red Sox returned to Red Wilson Field to face the Hyannis Harborhawks on Sunday night, hoping to bounce back from their three-game losing streak.

A tie is better than a loss for a team that has lost three games in a row although it may now make the final playoff standings in the East Division a bit more complicated.

In the eighth inning, Hyannis bats? rallied and scored two runs to tie the game.? An RBI double from Sam Haggerty (New Mexico) got things going and then Arden Pabst (Georgia Tech) popped up a sacrifice fly to even the game.

Y-D?s offense in the game was thanks to Rob Fonseca?s (Northeastern) RBI in the first inning to score Andrew Stevenson (LSU), an unearned run in the second inning where Joey Armstrong (UNLV) scored, and Stevenson?s RBI single in the seventh inning to score A.J. Simcox (Tennessee).

The Red Sox will close out their regular season tomorrow night at McKeon Park in Hyannis. First pitch is set for 6pm.