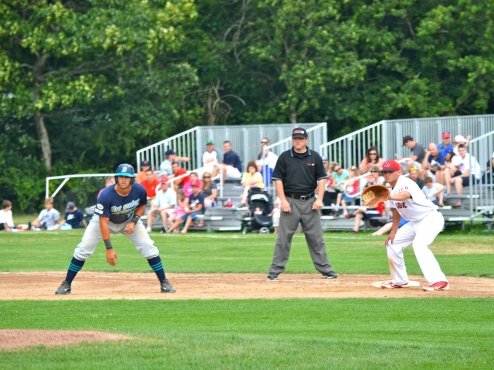 The Brewster Whitecaps opened up a 7-0 lead, thanks to a five-run second inning, and never looked back, defeating the Red Sox 11-3 at Red Wilson Field on Thursday night. Starting pitcher Justin Jacome (UC-Santa Barbara) struggled early on but had very little help from the defense behind him. Jacome allowed seven runs, only two earned, in three innings of work. Errors by third baseman Josh Lester (Mizzou) and shortstop AJ Simcox (Tennessee) extended the second inning that resulted in a three-run homerun by Whitecaps outfielder Gio Brusa (Pacific). Zach Gibbons (Arizona) extended Brewster?s lead to 7-0 in the third inning by driving in two runs on a single to right field.

The Whitecaps lineup had Y-D?s number all night, scoring three runs in the seventh and eighth innings respectively. Red Sox relief pitcher Parker Bugg (LSU) allowed three runs, all unearned, and much like Jacome, got very little help from the defense. Jack Fowler (Felician College) allowed a three-run home run to Gibbons in the eighth inning that extended Brewster?s lead to 14-3. Gibbons finished with seven RBIs on the night. Y-D relief pitcher Zac Favre (UCF) was impressive in one inning of work, striking out the side in the ninth.

Y-D?s lineup was silenced by Whitecaps starting pitcher Andrew Lee (Tennessee) for six innings. Lee allowed no runs on six hits and struck out two batters. The Red Sox did score three runs in the seventh inning, however, thanks to three errors committed by the Whitecaps. TJ Wharton (Catawba College) had an RBI single in the inning that scored Brennon Lund (BYU).

The Red Sox fell to (23-18) with the loss, and the Whitecaps improved to (15-24-2) on the year with the win. Y-D hopes to improve their playoff seeding when they travel to Whitehouse Field to take on the East Division leading Harwich Mariners (23-15-2) on Friday, August 1st. First pitch is set for 7:00pm.