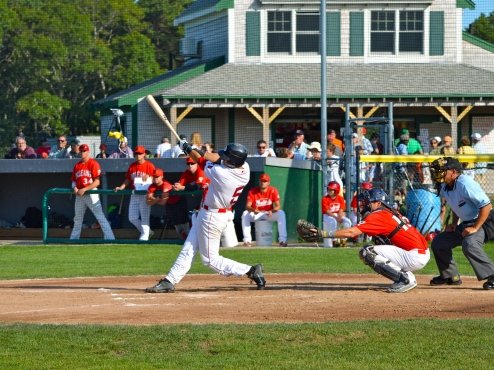 The third-seeded Yarmouth-Dennis Red Sox will face the second-seeded Orleans Firebirds in the Eastern Division Semifinals, with game one of the best-of-three series being played at Eldredge Park in Orleans on Wednesday evening at 7 p.m.

This summer?s playoff matchup between Yarmouth-Dennis and Orleans will be the seventh series between the two clubs and first since Y-D swept the Firebirds in the 2012 Eastern Division Finals. The Red Sox have won four of the six previous series against Orleans and 10 of 14 playoff games all-time.

About the Orleans Firebirds

Dalbec has made a name for himself as a two-way player, hitting five homers and driving in 18 runs, while also making 11 relief appearances in which he has held opposing batters to a .255 average. He boasts a 1.31 ERA and 16 strikeouts in 13.2 innings pitched.

Jacob Cronenworth (Michigan) highlights the ?Birds bullpen with 15 appearances and has been solid in the closer role, earning five saves over 23.2 innings of work in relief.

After finishing with an 8-2 record at UC Santa Barbara last spring, Justin Jacome has continued his dominance with the Y-D Red Sox. The southpaw had a 5-1 mark in seven regular season starts with Y-D, throwing 38 innings and striking out 28.

Rising junior Walker Buehler (Vanderbilt) has made two starts with Y-D since taking home the College World Series Championship. He received the win in both of his Cape League starts and made one relief appearance, allowing only two earned runs in 13.1 innings pitched.

The role of closer has largely been held by Phil Bickford (Cal State Fullerton), who has made eight saves for Y-D this season. Originally from Newbury Park, Calif., he was drafted 10th overall by the Toronto Blue Jays in 2013.

Since making his Y-D debut on June 14, Jordan Tarsovich (Va. Military Institute) has gained the attention of many, posting a .322 batting average in 40 games. A rising senior, he clubbed three home runs in the 2014 regular season.

He was named an East Division All-Star by the Cape Cod Baseball League and was the starting third baseman for the East in the 52nd CCBL All-Star Game in July.

It Keeps You Running?

The LSU Tiger has helped form the foundation of the Y-D outfield in 2014, appearing in all 44 regular season games and making only one error.

Around the Cape League

The winner of the Y-D vs. Orleans series will face the winner of the (1) Harwich vs. (4) Brewster matchup in the Eastern Division Finals.rn The Western Division Semifinals will feature the (1) Bourne Braves vs. (4) Cotuit Kettleers as well as the (2) Falmouth Commodores vs. (3) Hyannis Harbor Hawks.