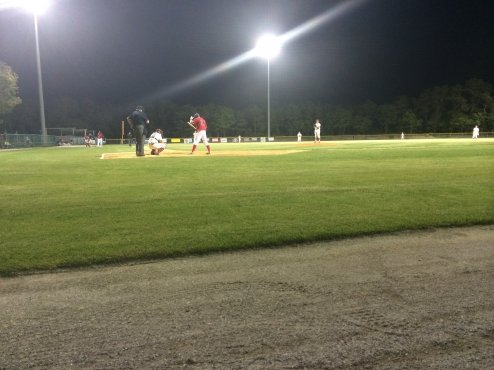 The Yarmouth-Dennis Red Sox kicked off their 2014 Cape Cod Baseball Season by traveling to Whitehouse Field to face the Harwich Mariners. The Red Sox struggled at the plate, which ultimately led to a 7-2 loss to the Mariners.

Behind a solid performance from Harwich?s James Mulry (Northeastern), the Mariners held Y-D to zero runs until the ninth inning when the Sox scored two on a late game rally. Mulry pitched 7 innings, allowed 2 runs on 5 hits, and struck out nine.

Not only was the Mariners? pitching solid, their offense impressed as they scored 7 runs in the first three innings.

Anthony Hermelyn (Oklahoma) got things going for Harwich as he hit to center field for a base hit, allowing Craig Aiken (Oklahoma) to score from second base. RBI?s from Hermelyn, Brendon Sanger (Florida Atlantic), and Angelo Amendolare (Jacksonville University) gave the Mariners a 3-0 lead. Four more runs would be scored by the Mariners to give them a 7-0 lead at the end of third inning.

On the mound for Y-D was Bryan Bonnell (UNLV), pitching 2.5 innings and allowing 5 runs. Nick Kozlowski (Hofstra) replaced Bonnell and he allowed 2 runs but managed to close out the 3rd inning. Doug Wiley (Franklin Pierce) and Henry Van Zant (Bowdoin College) also took the mound for Y-D, both combined to hold Harwich to zero runs for the rest of the game.

The Sox showed an offensive spark when they attempted to string a few runs in the bottom of the ninth. Michael Foster (Northeastern) got on base with a single. Michael Vigliarolo (Saint Louis) followed with a single and Jason Goldstein (Illinois) was walked, giving Y-D the bases loaded for the first time all game. Two runs came in for Y-D after a throwing error by Harwich.

The Red Sox will play their home opener Thursday June 12, 2014 against the Falmouth Commodores. First pitch is set for 5:00pm.