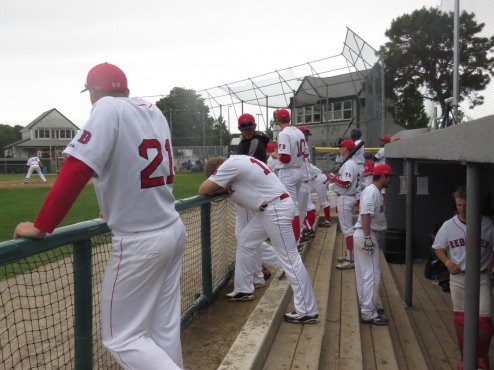 The Yarmouth-Dennis Red Sox fell to the Falmouth Commodores 3-0 on a chilly, overcast evening at Red Wilson Field. The Red Sox could never get the bats going in their home opener, as they registered only two hits in the ballgame. Commodores starting pitcher Kevin McCanna (Rice) was brilliant, going six innings, allowing only one hit, and striking out four.

The Commodores got on the board in the top of the first with an RBI single from catcher Austin Afenir (Oral Roberts) that scored outfielder Tate Matheny (Missouri State). Falmouth added to their one run lead in the fourth inning. After reaching base on an error, Afenir eventually scored on a wild pitch from Red Sox starting pitcher Kevin Duchene (Illinois). The Commodores tacked on one more run in the eighth on an RBI single from Matthew Eureste (San Jacinto College).

Duchene pitched four and two thirds, allowing four hits, while striking out five. However, Duchene struggled with his control walking four to go along with four wild pitches. Zac Favre (Central Florida) was sharp in relief, allowing no runs and striking out two, in two and a third innings.

It was a relatively uneventful night at the plate for the Red Sox, as outfielder Brennon Lund?s (BYU) single and Jason Goldstein?s (Illinois) pinch-hit single were the only two hits of the game. Y-D did put some pressure on the Commodores in the eighth inning, as Goldstein?s hit coupled with two walks loaded the bases, but the Sox came up empty handed. Falmouth pitcher Travis Stout (Jacksonville St.) recorded the save with a scoreless ninth inning.

The Red Sox look to notch their first win of the 2014 season on Friday June 13, 2014 when they travel to Falmouth to play the Commodores for the second half of a home and home. First pitch is set for 6:30pm.?