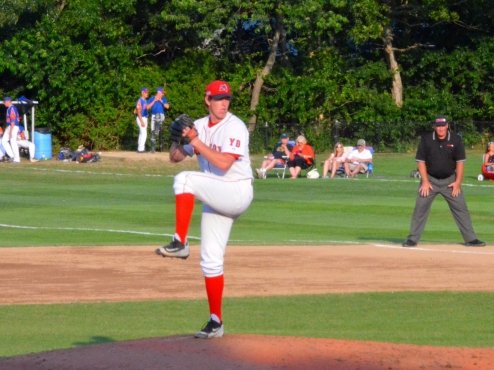 FALMOUTH, Mass. ?? The Yarmouth-Dennis Red Sox (23-15) fell to the Falmouth Commodores (25-13) on Wednesday night by a score of 8-5. Both teams entered the game atop their respective divisions, but a three-run seventh inning by the Commodores proved to be too much for the Red Sox to recover from. Thomas Ponticelli (San Francisco, 3-3) earned the win for Falmouth, while Dillon Bray (Western Carolina, 0-1) was charged with the loss for Y-D.

The Commodores got on the board early, getting to Red Sox starting pitcher Michael Baumann (Jacksonville, 2-2) for two runs in the bottom of the first. After Baumann set down Michael Gigliotti (Lipscomb) on strikes to begin the inning, Deacon Liput (Florida) sent a 3-2 pitch over the right field fence for a home run.

Baumann looked to be back in control after fooling the next batter, JJ Matijevic (Arizona), with two breaking pitches to start his at bat. But, Matijevic drew a walk and advanced to second on a wild pitch. Josh Watson (Texas Christian) then singled through the right side of the infield, scoring Matijevic and extending the Commodores? lead to 2-0.

The Red Sox manufactured a run in the top of the third, however, on a typical ?small-ball? play by manager Scott Pickler. With Nolan Brown (Texas Christian) on first and Korby Batesole (Fresno State) standing on third base with one out, Brown started to steal second and then stopped midway between the bases. This drew the attention of the Falmouth infield long enough for Batesole to slide across home plate safely, and cut the Commodores? lead to 2-1.

Deon Stafford Jr. (Saint Joseph?s) launched a two-run home run over the left-field fence in the top of the third, giving the Red Sox a 3-2 lead. This was Stafford?s fourth home run of the season, and came off the bat at 98 mph according to Trackman.

But, walks by Ryan Chandler (Rice) and Matt McLaughlin (Kansas) chased Baumann from the game in the top of the fifth, as Pickler brought Bray into the game to face the top of the Falmouth lineup. A throwing error on a bunt by Gigliotti allowed Chandler to score, and Liput followed with a sacrifice fly to give the Commodores a 4-3 lead. Falmouth tacked on the third run of the inning on a RBI double by Matijevic, which was his 11th RBI in just 17 games.

The Y-D offense looked like it was getting going in the seventh inning, as Kevin Smith (Maryland) led off the inning with a double. Connor Wanhanen (Texas Christian) drove in Smith with a ground out, but this was all the Red Sox could muster in the frame. The Commodores tallied three runs in the bottom of the seventh, stifling the Red Sox rally and putting the game out of reach.

In the eighth inning, Will Toffey (Vanderbilt) launched a double to right field and later scored on a error by McLaughlin. But, it was too little and too late for the Red Sox, as Seth Elledge (Dallas Baptist) worked a scoreless ninth inning for Falmouth to preserve the 8-5 lead and earn the save.

With the loss, the Red Sox drop back into second place in the East Division, sitting two points behind the Harwich Mariners. This is the first time Y-D has lost back-to-back games since June 22nd, when they dropped a 5-0 contest to Chatham after losing to Harwich the night before.

The Red Sox will be back in action on Friday night, taking on the Brewster Whitecaps at Red Wilson Field at 5 p.m.