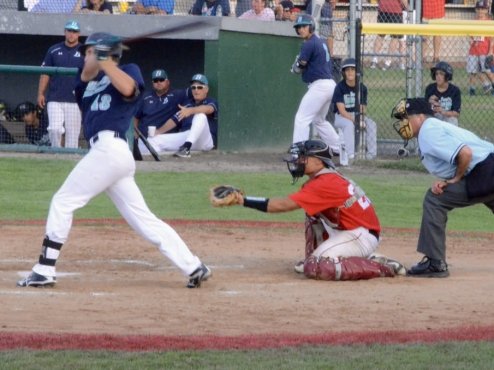 Stafford Jr. was terrific at the plate; he went 3-for-4 with a double and two home runs. With the two solo blasts, he has a home run in back-to-back games, after stroking one against Falmouth on Tuesday. Stafford Jr. was the cause of the three tallies for the Red Sox after the three RBI performance. The impressive showing sends him to six homers and 25 RBI on the summer campaign.

Bryan Sammons (Western Carolina) got the start for Y-D and had been tremendous after being moved from the bullpen into the starting rotation. He came into the contest with a 1.16 ERA , marking 21 strikeouts in 23.1 innings of work. Sammons tossed 6.0 solid innings, walked one and whiffed two Brewster batters.

Konnor Pilkington (Mississippi State) was on the hill for the Whitecaps, and pitched for 5.2 frames, walked three and fanned five Red Sox hitters.

Both Sammons and Pilkington received the no-decision, respectively.

Nathan Kuchta (San Diego, 2-1) was credited with his first loss, while Tyler Zuber (Arkansas, 3-1) picked up the win.

Y-D took a 1-0 lead in the third inning, after Tyler Houston (Butler) leadoff with a double, and was knocked in on Stafford?s RBI double.

However, Brewster had an answer in the fourth and fifth frame.

After a rare stand-up triple, Nicholas Dunn (Maryland) would tie the game at one apiece off of a Zack Gahagan (North Carolina) fielder?s choice.

On a Ryan Gridley (Mississippi State) ball smoked past the infield, Kel Johnson (Georgia Tech) scored, as the Whitecaps took a 2-1 lead.

A towering solo blast off of the lumber of Stafford would tie the game back up in the sixth.

Brewster stuck the dagger in the heart of Y-D in the seventh, as they pushed six runs across the board. Dunn?s bases-loaded double that scored three is what opened up the inning.

The Whitecaps continued to pour it on, as they added five more runs to their lead in the eighth.

The Red Sox face off against Chatham at Veterans Field. First Pitch is at 7 p.m.