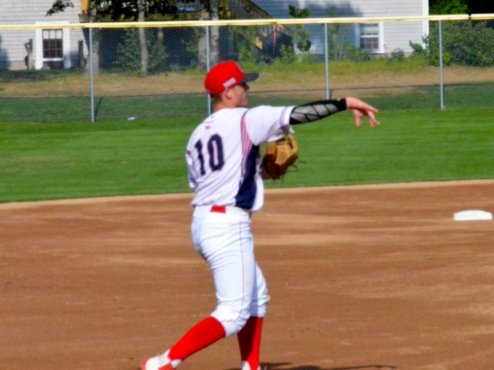 SOUTH YARMOUTH, Mass. ? It was smooth sailing for the Yarmouth-Dennis Red Sox through eight innings on the muggy Tuesday afternoon at Red Wilson Field. However, the Chatham Anglers bats came alive in the ninth, as they put five runs on the board to win, 5-4.

Jake Palomaki (Boston College) got the top half of the inning started with a one-out single into left field. DJ Artis (Liberty) would reach on a single, and Sean Bouchard (UCLA) drew a walk, which loaded up the bases. A pinch hit Gunnar Troutwine (Wichita State) single knocked Palomaki and Artis home, closing the Angler deficit to two. With one crack of the bat, Stuart Fairchild (Wake Forest) launched a two out three-run home run into the trees, giving Chatham a 5-4 lead.

In the bottom half, Donavon Casey (UCLA) made a beautiful catch in right, which robbed Matt Winaker (Stanford) of an extra-base knock for the second out. Moises Ceja (UCLA) then shut the door, getting his fifth save of the summer season.

Despite the loss, Jared Janczak (TCU) stole the show. It was almost as if he pitched with a chip on his shoulder, after a tough last outing. Janczak struck out three, walked two and gave up only one hit in six innings of work. The hit came off of Palomaki leadoff blooper in the first inning.

Janczak is known for pounding the strike zone with his sinker causing lots of ground balls. He did just that, resulting in 11 Chatham groundouts in the contest.

Lincoln Henzman (Louisville) got the start for the Anglers as he tossed five innings, struck out five, walked one and gave up six hits.

Both Janczak and Henzman were credited with the no-decision.

Will Toffey (Vanderbilt), who went 2-for-4 in the ballgame, leadoff with a base hit. He stole second and advanced to third on a Corey Dempster (USC) single. Connor Wanhanen (TCU) sent Toffey home with a base knock, while Dempster would also score after a throwing error. Wanhanen would cross the dish on a Tyler Houston base hit.

Dillon Persinger (Cal State Fullerton), who also went 2-for-4 in the showdown, gave the Red Sox their fourth run in the seventh after a screaming line drive that carried over the center field wall.

The Red Sox face off against the Falmouth Commodores at Arnie Allen Diamond at 6 p.m.