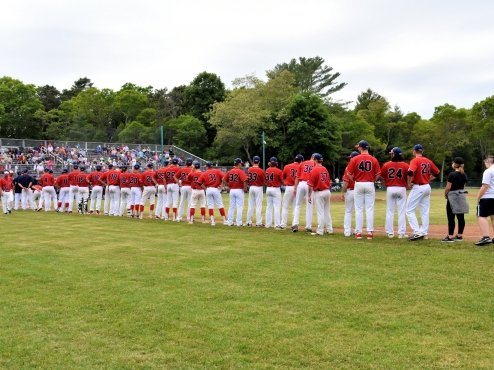 COTUIT ? On opening day here on the Cape, the Yarmouth-Dennis Red Sox fell to the Cotuit Kettleers, 4-3. It sure was a pitcher?s duel, as both teams struggled to get on the board early on. Although Y-D struck first, Cotuit seemed to have an answer for just about everything that was thrown at them in this game.

John Beller (USC) was on the mound for the Red Sox to start. He ended up going 3.2 innings, while giving up two runs on five hits. He struck out four batters, and eventually handed the ball over to Chase Smith (Pittsburgh). Ledgend Smith (Oklahoma) and Brandan Dufault (Northeastern) also saw action in the game. While Dufault went on to be charged with the loss, he picked off two runners in the 8thinning thanks to a couple of impressive moves on the mound.

Jack-Thomas Wold (UNLV) proved that he needed little time to get used to wooden bats, as he hit a dinger over the fence in right field in the 4th. The moonshot was the first run of the day and really set the tone for the Sox. He followed up with a tremendous diving stop for an out at first base in the home half of the inning.

The Kettleers wasted no time in striking back, as they scored two runs while also knocking Beller out of the game in the bottom of the 4th. The 2-1 lead lasted until the 7th, when YD was able to put together a couple of runs of their own.

Pinch hitter Jeff Costello (Northeastern) smashed a pitch in the gap in the outfield and made it safely into third as he dove head first. He drove in a run on the play, tying the game up at two runs apiece. Andrew Eyster (South Carolina Columbia) also found himself with a pinch hit RBI, as he drove in Costello with a base knock to right field.

Just as they did the first time Y-D took the lead, Cotuit once again regained it. Dufault took the mound for the Sox with runners on second and third with only one out in the bottom of the 7th. A chopper came right back at him, and he looked the runner back on third and made the out at first. A great play ended up being irrelevant, however, as Adam Oviedo (TCU) snuck a groundball through the infield and brought home two runs. It gave Cotuit a 4-3 lead and they never looked back.

Yarmouth-Dennis falls to 0-1 on the year, but will quickly have an opportunity to change that. Their home opener is tomorrow at 5:00 P.M. against the Wareham Gatemen at Red Wilson Field.