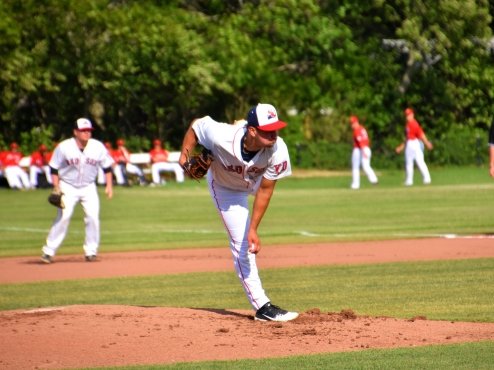 YARMOUTH ? The Yarmouth-Dennis Red Sox took down the Orleans Firebirds in their home opener, 8-2. Fresh off of an opening day loss, the Sox played with a sense of urgency and looked good right from the get-go. A perfect combination of both pitching and hitting was the story of the day for YD, who?s now improved to 1-1 on the year.

We?ll start with Ian Seymour (Virginia Tech) who was on the bump for the Red Sox. He looked comfortable from the start, fanning nine Firebirds over five innings of work. He gave up two runs on five hits, while also earning the win. In his post-game interview, he alluded to why his stuff was so lethal in his first start of the season. ?My fastball command later in the game was definitely working, and I had my changeup. That?s usually my go to pitch, and luckily I had it tonight.?

The second YD batter of the game, Andrew Eyster (South Carolina Columbia), hit a no doubter over the wall in right field. The home run gave them an early 1-0 advantage, but Orleans quickly tied things up in the 3rd inning.

That?s when the Red Sox exploded for four runs in the home half of the inning, beginning with a run-scoring double off the bat of Wyatt Young (Pepperdine), putting runners on second and third. Eyster kept it rolling with a single which scored the runner from third. The damage was not done, as Riley Tirotta (Dayton) grounded into a fielder?s choice which brought Young home to score. An error off of the bat of Austin Wells (Arizona) allowed Tirotta to score an unearned run all the way from first base.

Orleans responded with a solo home run in the 4th which tightened the gap to 5-2, but YD was not finished just yet. William Escala (Miami) and Jack-Thomas Wold (UNLV) each had runs-batted-in in the 6th, while Daylan Nanny (Western Carolina) scored on a wild pitch. The 8-2 lead would last the duration of the ball game.

Aside from Seymour?s great day, Jacob Winger (High Point) also saw action, beginning in the 6th. He went on to pitch three scoreless innings, giving up two hits and striking out four batters. David Stiehl (Northeastern) came in to close things out in the 9th and did just that by striking out two batters while giving up one hit.

Andrew Eyster is now five for six on the year, with three runs batted in and a solo home run. Although it?s early, it?s fair to say he?s raking with his impressive .833 batting average.

Yarmouth-Dennis will travel to BC High on Wednesday to take on the Wareham Gatemen at 6:45.