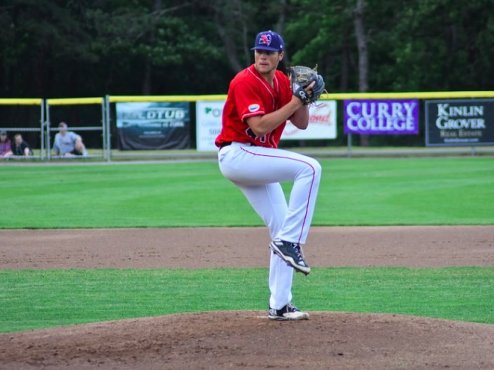 BREWSTER ? The 2018 season came to a close Monday evening, as the Yarmouth-Dennis Red Sox dropped Game Two of the East Division Semifinals 12-2 to the Brewster Whitecaps.

After having been eliminated by these same Whitecaps in the opening round of the playoffs last summer, Coach Pickler knew he?d need a spectacular performance from his starter to force a decisive Game Three at Red Wilson Field Tuesday. Brant Hurter (Georgia Tech) was Pickler?s choice Monday, and he rewarded his manager?s confidence with five innings of one-run ball.

The Whitecaps got to Hurter early, plating the opening run of the ballgame in the first on a Conor Grammes (Xavier) triple that scored Dominic Canzone (Ohio State). The 6? 6? lefty settled down nicely thereafter, working around trouble to keep Brewster off the board for the next four innings.

It took them two innings, but the Y-D bats finally broke through against Whitecaps starter Andrew Schultz (Tennessee) in the third. After walking Noah Campbell (South Carolina), Schultz hit Andrew Daschbach (Stanford) with a pitch before walking Jonny DeLuca (Oregon) to load the bases. Schultz?s evening was over, as he was replaced by right-hander Chance Hroch (New Mexico State).

The first batter Hroch faced, Zach Zubia (Texas), brought home the first Y-D run of the game with a sacrifice fly out to left. The Red Sox weren?t done though, as Nick Quintana (Arizona) roped a single to center that brought Daschbach home.

Pickler sent Hurter out to begin the sixth, but he faced just two batters before being replaced by Mitchell Tyranski (Michigan State). Tyranski secured the first out of the inning via strikeout, but walked Cameron Eden (California) and allowed an Ike Freeman (North Carolina) single to load the bases.

With the right-handed hitting Joe Donovan (Michigan) up at the plate, Pickler turned to Sam Kessler (West Virginia) to secure the final two outs of the inning. In one of the most pivotal moments of the season, Kessler induced an inning-ending double play ball to keep the Sox ahead.

Evidently, the traffic on the base paths in the sixth was simply a sign of what was to come for Brewster. Canzone led off the seventh with a double and came home to tie the game just one batter later on a Ray Alejo (Central Florida) single to left. The Whitecaps weren?t done though, as Grammes added an RBI single to score Alejo that put them ahead for good.

The Whitecaps added another run on a wild pitch, and tacked on an additional eight runs in the eighth for good measure.

After thoroughly dominating the entire league throughout the regular season, all it took was two bad performances for the Red Sox to get knocked out of the playoffs. The Red Sox were a league-best 15 games over .500 and finished with the most points (59) of any team in the Cape Cod League. Brewster snuck into the East Division playoffs despite finishing more games under .500 (14) than victories (13) on the season. Of course, none of that matters in a best of three series, and the Whitecaps came away victorious despite being the lower seed for a second consecutive season.

It?s a bittersweet end to such a spectacular season for the Red Sox. Y-D led the league in batting average, putting up a .285 mark that was .021 higher than the second place Wareham Gatemen. The Summer Sox led the circuit in OBP, SLG, OPS, H, RBI, TB, and sacrifice flies. The pitching staff finished with the second-best ERA behind Falmouth, finishing second in walks only to Orleans.