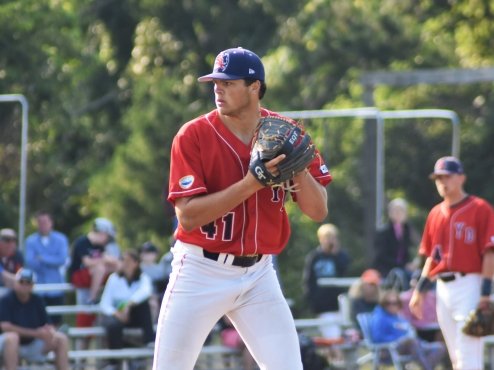 ORLEANS?The Yarmouth-Dennis Red Sox added to their league-leading 40 points (now 42) with a 5-2 win over the Orleans Firebirds on Tuesday night. The win extended Y-D?s win streak to five straight, tying them with the Hyannis Harbor Hawks five-game win streak for the second-longest winning streak of any team this summer.

The Red Sox, as they have done in most games this season, got the bats going early. Noah Campbell (South Carolina) and Andrew Daschbach (Stanford) hit back-to-back one-out doubles in the top of the first, but Campbell was cut down at the plate trying to score. Daschbach ended up coming home, though, after Reese Albert (Florida State) walked and Jonny DeLuca (Oregon) reached on an error.

The Sox went down quietly in the second inning before scratching across two more in the third thanks to Patrick Bailey (NC State) and Christian Koss (UC Irvine) RBI hits. That was all the offense Y-D was able to muster on the night but fortunately, that was all they needed.

On the mound, Brant Hurter (Georgia Tech) threw a gem. He set the side down in order in the first and second before giving up his first hit of the day in the third inning. Hurter threw five innings of one-run ball, allowed six hits, walked none and struck out five.

Ty Madrigal (St. Mary?s) threw three innings in relief of Hurter and was brilliant as well, allowing just one run on three hits, walking one, and striking out two. Ryne Nelson (Oregon) shut the Firebirds down in the ninth to earn his fourth save of the year. Nelson?s four saves tie him for the third-highest total of any pitcher on the Cape this season.

The Sox bats have been excellent during the team?s five-game win streak. The team is averaging 6.4 runs per game while limiting opponents to just 3.4 runs per game. Y-D is hitting .316 during the winning streak, and the team?s .283 average on the season ranks first in the league. The gap between Y-D?s .283 and second-place Bourne?s .262 is equal to the gap between Bourne?s average and seventh-place Harwich?s team average. In other words, the Red Sox are really good.

Patrick Bailey continued his hot hitting by going 1-3 with a run scored, an RBI, and a walk. His .364 average ranks second on the team behind Noah Campbell, who picked up two hits of his own on Tuesday night.

Ryne Nelson?s strikeout to seal the victory. Nelson came in with a three-run lead in the bottom of the ninth to try to close out the game and ran into a little bit of trouble, allowing the first two batters of the inning to reach base. He stranded both baserunners, though, by striking out the next three batters to face him and give Y-D their fifth straight victory.

The Red Sox are back in action Wednesday night against the Bourne Braves. First pitch at Doran Park is scheduled for 6 p.m.