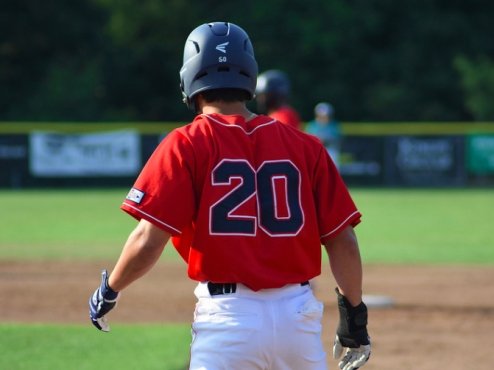 BOURNE?The Yarmouth-Dennis Red Sox traveled to Bourne for the first time this season but came out on the wrong side Wednesday evening, falling 6-3 for just their fifth loss since June 17th.

Tommy Mace (Florida) made his second start of the season for Y-D but ran into trouble early. The right-hander beaned Tyler Fitzgerald (Louisville) with his second pitch of the game and walked the next batter, Anthony Prato (UCONN).

Jared Triolo (Houston) reached base on a fielder?s choice, loading the bases for Spencer Brickhouse (East Carolina) and his team-high four home runs. While he didn?t homer, his RBI groundout to Andrew Daschbach (Stanford) brought home the first run of the game.

The Braves added their second run on a wild pitch, and their third run on an RBI single off the bat of Ashton Bardzell (Hartford).

Bourne scored all six of their runs off of Mace, tacking on a run in the third and two more in the fourth.

The Red Sox put together a two-out rally in the fourth that began with a walk from Nick Quintana (Arizona). In stepped Brad Beesley (Cal Poly), who roped a double to left that brought Quintana home all the way from first. The next batter, Zach Zubia (Texas), doubled home Beesley to bring Y-D within two.

The only other run for either team came on a Quin Cotton (Grand Canyon) single in the fifth that scored Andrew Daschbach.

The Y-D bullpen has played a large role in the teams success this season and Wednesday was yet another example of this. Trent Denholm (UC Irvine), Sam Kessler (West Virginia), and Tyler Madrigal (St. Marys) were all named to the league?s All-Star team, but didn?t pitch against Bourne. Instead, Coach Pickler turned to Braidyn Fink (Oklahoma) and Mitchell Tyranski (Michigan State), who turned in outstanding performances to keep the Red Sox in the ballgame.

Fink threw 2.2 innings, allowing three hits and walking two while also picking up six strikeouts. Tyranski came on with two-out in the seventh and allowed just one hit while striking out two.

Brad Beesley?s double in the fourth to get the Red Sox on the board. The outfielder has been the recipient of more consistent playing time as of late and has taken advantage. He picked up two more hits Wednesday, raising his season batting average to .355.

The Red Sox return home to Red Wilson Field tomorrow to finish the home and home series with the Braves. First pitch is scheduled for 5:00 p.m.