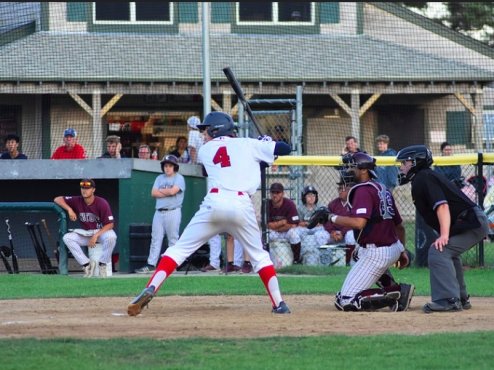 It didn?t take long for the Red Sox to get on the board as Andrew Daschbach (Stanford), the third hitter of the game, launched a no-doubter over the left field fence to put Y-D ahead by two. The two-run shot was Daschbach?s fifth of the summer, which places him in a tie for third place on the league leaderboard.

The Red Sox extended their lead to three in the second inning, as Nick Quintana (Arizona) crushed a curveball from Jeff Belge (St. Johns) for his second home run of the season.

Jensen Elliot (Oklahoma State) made his fifth start of the season for Y-D and allowed three runs for just the second time this summer. Blake Sabol (Southern California) got the Anglers on the board with his league-leading seventh home run of the season.

It would remain a 3-1 ballgame until the fourth when Adam Kerner (San Diego) singled home Quintana. The backstop made his first start since Thursday and collected two hits in a game for the first time since a June 27th matchup against Harwich.

The Anglers would answer in the home half of the inning though, this time with a two-run homer off the bat of Colin Simpson (Oklahoma State). Simpson, a collegiate teammate of Elliot?s at Oklahoma State, was 3-3 Sunday and had half his team?s hits.

Y-D added a third home run in the fifth, this time off the bat of shortstop Christian Koss (UC Irvine). The homer was the first of the season for Koss, who was named as a Cape League All-Star on Saturday.

?Anytime you can put a good swing on the ball, it feels good,? said Koss after the game. It was a special home run for Koss, as his parents were in attendance Sunday. ?It was just a great moment. I was happy my parents got to see that.?

Koss played with the Red Sox last season and led the team in batting average with a .309 clip, but wasn?t selected as an All-Star in 2017.

?It?s a huge accomplishment not only for me but all the guys on the team,? said Koss. ?Having nine All-Stars shows what this team is capable of. We?ve got a lot of good players on this team. A lot of guys who could?ve been on the All-Star team. Just the fact that everyone comes out to work every day shows something about our team, and the results are showing.?

Both teams took the field despite heavy fog beginning in the eighth. After Michael Busch struck out, the umpires put the game under a 30-minute delay due to the fog. The game was eventually called and reverted back to the last full inning of play, which was the seventh.

The nine Y-D All-Stars had their hands all over this win. Trent Denholm (UC Irvine) came on in relief of Elliot and struck out five Anglers in his 2.1 innings. He allowed just two hits while walking one, keeping his ERA at a pristine 0.00 for the season.

Elliot earned his fourth win of the season to go along with his 3.37 ERA. Daschbach?s OPS rose over 1.000 to 1.004 after his home run Sunday. Jonny DeLuca (Oregon) made a superb leaping grab in center to rob Tristin English (Georgia Tech) of a home run.

DeLuca?s catch in the fourth inning. He went hitless at the dish for the first time since July 11th, but more than made up for it with his incredible robbery on English?s deep fly ball.

The Red Sox will head to Boston for their Fenway Park workout on Monday. Y-D is back in action Tuesday on the road at Orleans. First pitch is scheduled for 7:00 p.m.